The Innsmouth Cycle – The Taint of the Deep Ones

The Taint of the Deep Ones

An Occasional Look at Lovecraftian Anthologies: 6 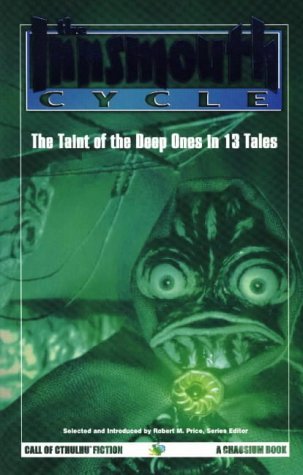 The first thing I have to do here is to give a truly geekish fanboy rave to the introduction by Robert M.  Price, who also selects the tales and poetry here.  Yes, that’s what I said: the introduction.

I was two pages into this near-eight pages of really tiny type when I stopped, shook my head and went back to start again.  On second thoughts, this isn’t an introduction, it’s more like a mini-thesis; but not a boring one that points at itself and says: Look how clever I am.  It is clever, and that’s nearly a bad word to some people, but I found it utterly fascinating.

Look, I’m sure it won’t be to everyone’s taste but if you want an immensely insightful take on one of Lovecraft’s seminal stories –what that very strange writer Michel Houellebecq calls one of his Great Texts – then  this is essential reading.

I’ve read The Shadow over Innsmouth many times and the highest praise I can give here is that Price’s intro made me want to re-read it immediately in order to catch what I had missed.  He manages to pull together Revitalization Movements, Melanesian Cargo Cults, coming-of-age Rites of Passage rituals and many more strands of thought, leaving you with the impression that you have possibly never read Lovecraft’s masterpiece fully before.

Price is taking a different approach with The Innsmouth Cycle than might be expected – and to my mind, a more interesting one.  It is not just for the reader who enjoys tales of the decadent New England seaport and its heritage of horror.  Price seems to want –in addition to sharing his own penetrating analysis – to give a very full introduction to the first-time reader.  It may not please everyone, because this means that it is nearly 100 pages out of a 230-page anthology before work that might be new to the reader is even presented.  Price wants to show us the predecessors of The Shadow over Innsmouth and also that well-anthologised story itself.  I was fine with that, but be warned.

He introduces us gently, with a very short prose piece by Lord Dunsany called Of Yoharnath-Lahai (The God of Little Dreams and Fancies).  The sole reason for this appears to be that the name is probably the inspiration for HPL’s undersea city of the Deep Ones, Y’ha-nthlei.  Actually, now that I type both names I’ll just go ahead and say that it is definitely the inspiration.  And that title is nearly as long as the piece itself.

The second Innsmouth antecedent is The Harbor-Master by Robert W. Chambers.  Despite the renewal of interest in Chambers (as well as the great Ambrose Bierce) that has been occasioned by the success of Season 1 of True Detective I’m not all that familiar with his work. Lovecraft liked this one a lot and I thought I had made a real discovery myself at first.  It is very atmospheric in its build-up before taking a groaner of a turning down Lame Lane that has to be read to be believed.

I preferred Fishhead which, along with the Chambers story, certainly seems to have inspired the infamous ‘Innsmouth look’ of staring eyes, repellent skin and flabby lips.  The author, Irvin S. Cobb is another one I keep meaning to find out more about.  He was a Kentucky columnist who also covered World War I and had rather an impressive-looking head himself.  This tale seems to show a flair for regional writing, which I always enjoy.

The Shadow over Innsmouth probably needs little said about it to anyone reading this.  It is Lovecraft’s stone cold classic of a decadent New England town where cross-species interbreeding has led to ghastly results.  It was in fact the only book ever to appear (and even then in a very small print run) in Lovecraft’s lifetime.

Attack of the Killer Dolphins!

Having established Innsmouth and its ancestors, the first ‘modern’ story Price gives us is James Wade’s The Deep Ones.  Like his fine tale, The Silence of Erica Zann, this was set in the sixties and heavy on the counter-culture references.  There’s a Timothy Leary-like cult leader and attempts to interact with dolphins, which was then fashionable – even with people who didn’t holiday in Dingle, Ireland.  Spot the in-joke.

Reading this, I couldn’t help wondering if perhaps dolphins were perhaps not considered to be as cuddly and cute back then as they are now:

“A lithe, bulky, yet graceful shape – mottled gray above, dirty white below, with a long saw-toothed snout and deep-set, intelligent eyes – hung motionless in the shallow water on its slowly fanning flippers.”

*Gulp* I never quite thought of them like that.  That had me remembering the killer dolphins in that episode back when The Simpsons was funny.  Lousy killer dolphins!

This is a cracking story, completely ruined by one of the worst final paragraphs in the whole of human history – and it’s one of those awful italicized ones into the bargain.  Frustratingly, it is also totally unnecessary since the penultimate image is a fine, powerful one that taps into genuine myth-memories and would have been a superb conclusion.  A pity.

A Darker Shadow over Innsmouth is a slight piece, also by Wade. It’s some kind of ‘sixties satire of Vietnam and the possibility of nuclear war.  I think that it’s meant to be funny; but maybe you had to have been there.

Robert M. Price also does mini-introductions to each story and one of his best is for Franklyn Searight’s The Innsmouth Head, where he has a pop at the strange people who think that shooting those ferocious, man-eating, dangerous animals called deer is a macho thing to do.  It starts off well, with a nice Creature from the Black Lagoon feel to it; but then you notice that this narrator doesn’t speak like anyone you ever met.

For instance, he doesn’t suffer from hangovers; instead, his senses are deadened because he has ingested large quantities of alcohol into his system.  I know that feeling all right, even if I’ve never put it in quite those terms.

And that’s the way he goes on all the time.  Jeez.

Anyway, he and his buddy Alan Hasrad are fishing off the coast of Innsmouth and when he catches a really big fish that walks around on two legs (that’s the giveaway) he thinks for some reason that it’s a good idea to hang it on his wall – and there follow the predictable dreams of sunken R’lyeh.

You know, writing it down like that makes it sound pretty good, but in fact it’s quite lame.  And can you believe that a die-hard Lovecraft- head like me went through the entire tale without getting the ‘Alan Hasrad’ reference?  Slap my wrist.

Of Beauty and Horror

On the other hand, Price way overeggs the pudding more than just a little bit with his notes for Henry J. Vester III’s Innsmouth Gold:

“This has got to be one of the most controversial small press horror tales ever penned.  The ensuing brouhaha proved to be almost as horrifying and entertaining as the story itself.”

You can be sure that my flabby Innsmouth lips were drooling large ropy strings of saliva in anticipation after reading that! Well, the anticipation was about the best part of it.  I’ll take Robert’s word that it caused a flap, but I can’t see it as anything other than just another Lovecraftian pastiche, no better nor worse than most of them.

As to Roger Johnson’s Custos Sanctorum, I was rather surprised to find it not only a gripping story but rather a beautiful one.  Perhaps that’s not a word that you expect to encounter when discussing Innsmouthian tales, but it strikes me that this is one of the few homages that genuinely shows the love that these creatures have for their faith.  After all, one man’s cult is another man’s religion.

Some Raptures in Black

Now, I approach Stephen Mark Rainey’s Rapture in Black with some trepidation.  The reason for that is because I consider it to be the best story in this collection.  Yet I’m hesitant to actually recommend it because it will quite honestly leave you with a very bad taste in your mouth.

A contemporary tale, it introduces us to Maria, a striking Goth type of around thirty years of age.  The writing is excellent and in only ten pages we feel as if we know and care about this divorced lady.  She is flawed, certainly; and she is perhaps a little bit promiscuous and drinks too much; but by God do we believe in her.  Her story, however, is an extremely ugly one; (reminiscent, in fact, of Fat Face, which I covered in the review for Cthulhu 2000.)

I would have thought that if there was going to be any controversy it would have been about Rapture in Black.  People are funny, though.  What occurred to me was how often these homages/pastiches can be quite camp and even move into out-and-out kitsch.  And although Lovecraft himself always, always played it straight, I wonder if that isn’t part of the charm.

This one, however, is grim and bleak right down the line.  We get the feeling that if the Deep Ones really were amongst us, that this is just the way they would operate.

As I said, in my opinion this is the best story of this anthology – but I would certainly understand people not agreeing with me.

Live Bait is by Stanley C.  Sargent and I have to wonder if he is any relation to the Innsmouth coach driver, Joe.  It’s a pseudonym, I’m guessing.

This is an intriguing idea, trying to show a familiar theme from an unusual angle.  And I have to say that I must have been one of life’s innocents; because I was in my thirties before I learned (through director Alan Parker’s Come See the Paradise) that America had sent its own Japanese-American community, in an unbelievably shameful act, to what were essentially concentration camps on American soil.  What a shock I got when I discovered this, back in those impossibly naïve days.  And that should give you an idea of where Sargent goes with this one.

There are some clever ideas here; and it addresses that question a lot of us have asked over the years:  just why on earth was the narrator of The Shadow… so sure that he would be welcomed back with open flippers to Innsmouth after betraying his own race?  I never quite got that.

Unfortunately, despite an interesting set-up, Live Bait quickly descends into that (gruesome) camp-area I was talking about earlier – and then forgets to stop until it’s too far over the top for saving.  An interesting failure.

All of the stories in The Innsmouth Cycle have been published before, albeit several of them only appearing in small press publications such as Cthulhu Cultus, Cthulhu Codex or Crypt of Cthulhu.  Devil Reef by John Glasby appears here for the first time.  It is another tale that plays it straight and has some nice descriptions of the rotting fishing town, although it is in essence like one of those old E.C. comics where the bad guy gets suitably and satisfyingly punished.

And apart from three Innsmouth-themed poems, that’s all, folks!  Everything winds up with a nice little parable called The Transition of Zadok Allen by Lewis Theobald III – which is definitely a pseudonym!  It imagines what might have happened to the likable, blabber-mouthed old drunk of the source story; and it is a fitting end to a not-bad collection.

The Innsmouth Cycle is A Chaosium Book from 1998.

Next:  Return to Lovecraft Country.