The Four Horsemen of the Apocalypse (1921)

The Four Horsemen of the Apocalypse 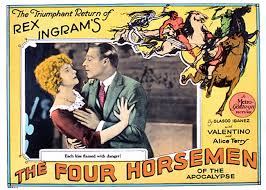 There was a rare treat for silent movie fans on the 15th of March this year when Dublin’s beautiful St. Patrick’s Cathedral hosted a rare screening and live score performance of Rex Ingram’s majestic 1921 classic of the cinema, The Four Horsemen of the Apocalypse.

Now, it isn’t quite accurate to describe Rex Ingram as a ‘forgotten film director’.  Certainly, those of us who love the films of that early era have always been aware of this great Irish director.  I mean, this man was huge in his day.  But this certainly was a not-to-be-missed chance to bring both the man and his work to a whole new audience.  And it was an opportunity seized on with infectious gusto by Trinity College Dublin lecturer Dr.  Ruth Barton, author of the book Rex Ingram:  Visionary Director of the Silent Screen.

Dr. Barton introduced Ingram’s great masterpiece The Four Horsemen of the Apocalypse in a riveting talk that placed the film squarely in the context of his life and work.

He was born Reginald Ingram Montgomery Hitchcock (no relation!) in Dublin in 1892 but –as the result of his father being a Church of Ireland minister at the Old Rectory in Kinnitty, County Offaly – he grew up and spent his formative years in that village.  In 1911, having failed to get into Trinity, he emigrated to the United States and there began to work his way up in the then-fledgling Hollywood film industry – first as a set decorator and painter, then as an actor and later as one of the top three directors of the day, helming films that were not only artistic but very commercially viable.

Anyone who knows me even slightly is aware (since I seldom draw breath from talking about him) of my great passion for the films of the American maverick Sam Peckinpah.  So I was thrilled to see that, years before he was even born, Ingram fitted into the mould of Peckinpah.  Well, vice versa, of course.

Both had done some acting before settling into their destined roles; both of them wrote and produced; both were handsome, with vibrant and forceful personalities; both wanted their films precisely as their vision demanded it; and both had a tendency to alienate a hell of a lot of people.  Says Dr. Barton:

“He started mucking around in the early cinema industry and he was there at the very beginning of film… He was a complete control freak and kept falling out with people.  He wanted films to look exactly as he wanted them to be.”

Ingram began to become disillusioned with an industry that was very quickly establishing its own method of control – the unhappy extent of which we see in many of today’s woeful offerings – and he finally moved to Nice, in the south of France, where he set up a studio that would let him do things in his own way.

However, he never seems to have particularly wanted to make the transition to ‘the talkies’ and in 1932 he retired from directing.  A keen admirer of all things Arabic (which he spoke), he spent most of the rest of his life dressed as an Arab and roaming around North Africa in the company of various sheiks, even converting to Islam in 1933.

The Four Horsemen of Today

But crucially, does The Four Horsemen of the Apocalypse stand the test of time?  And the answer to that must be a glorious, triumphant YES!  It is a truly remarkable picture, the very first anti-war movie (and how!) and is almost as stunning today as it must have been in 1921.  I can only imagine how this film appeared to an audience fresh from the horrors of World War One.

Film fans — and in particular students of those glorious early days — owe a debt of gratitude to all who made this event a reality.

In a review of a different film, Behind the Door (1919) for his excellent blog Silent Volume, Chris Edwards wrote something that can be equally applied here:

“One of the pleasures of silent film is that there’s no such thing as a definitive viewing.  There’s always a new take on an old film – be it a new score, or restored footage, or new footage, once thought lost.  Perhaps the addition of colours or tints that recover, for audiences in the early 21st Century, a theatrical experience more authentic to the early 20th.  We are part of a paradox here:  one in which current art is impressed upon the art of the past; and that past, in turn, appears to us like something more fully of its own time.”

The first half of the film is a tangled web of relationships, so deftly handled by screenwriter June Mathis (of whom, more later) that the audience is able to follow the complex interplay of characters with ease.

Madariaga (Pomeroy Cannon) is a wealthy and powerful Argentine landowner who presides with considerable ruthlessness over a mixed extended family of exiled French and Germans, with his sympathies firmly on the French side.  His grandson Julio (Rudolph Valentino) – something of a dilettante and womanizer – openly adores him.  Yet he fares badly in the old man’s will and when the family breaks up, returning to their respective home countries, he ends up living a bohemian life in Paris, where he continues with his womanizing ways.

It is here that he falls in love for the first time, with Marguerite (Alice Terry, would become the second Mrs. Ingram). She is a beautiful but unhappy soul, trapped in a loveless marriage with a decent but much older man, Etienne Laurier (John St. Polis).  Of course, their affair causes an enormous scandal when it is discovered.

The startling thing for me here was in really understanding for perhaps the first time the enormous impact that Valentino must have had on female audiences with this, his breakthrough role.  From the moment that Ingram’s cameras light on that smoldering face, cigarette dangling from his lips as he arrogantly surveys a dance floor before focusing on a woman he desires, there must have been no doubt that audiences were witnessing the birth of one of the legendary stars of the silent screen; and the famous tango scene that follows is one of the most celebrated in early film history.

Hunched slightly forward, predatory and moving with sensuous ease, it’s not difficult to understand why American males disliked this actor so much.  I’d imagine that he was the cause of a fair bit of jealousy, to put it mildly.  He quite simply dominates the screen whenever he appears.

He had screenwriter June Mathis to thank for getting his foot in the door at all.  Just as Rex Ingram would become one of the top three Hollywood directors, Mathis was in the top three of influential filmmakers.  She was obsessed with the Book of Revelation and the image of the Four Horsemen – here depicted as Conquest, War, Pestilence and Death – and adamant that she could bring to the screen Vicente Blasco Ibáñez’s novel The Four Horsemen of the Apocalypse.  To that end it was the lady herself who chose Rex Ingram to direct and the unknown Valentino, who she had previously seen in a small part, for the pivotal role of Julio.

Two headstrong people, she would collide on several points with Ingram, although they would make four films together; but Rudolph Valentino would remain a devoted and lifelong friend of this astonishing woman.  In 1923 he told columnist Louella Parsons:

“She discovered me; anything I have accomplished I owe to her, to her judgment, to her advice and to her unfailing patience and confidence in me”.

It was certainly a confidence that paid off.

The Devils Ride Out

As the threat of a world war becomes a reality, the film moves towards the shockingly dramatic moment chosen for the Intermission card, as we see the Four Horsemen ride out on their mission of destruction.

In the second half of the film, Ingram spares the audience little in its brutal depiction of war.  Julio has joined the French army, where he becomes a different – and better – man; and his one-time lover Marguerite is a nurse in Lourdes where in a supreme irony she cares for her estranged husband, who has been blinded in the conflict.  War has changed the lives of everyone; and when the castle of Julio’s father is taken by the Germans in the First Battle of the Marne (one of whom is, in another of the film’s ironies, Julio’s first cousin), men are degraded and humiliated, women assaulted and raped.

No one could ever say that this is a film that shirks from what happens in time of war.  In what is perhaps the most achingly moving image for this particular viewer, a little girl tries to wake her mother, who lies dead in a pile of rubble, whilst another child plays nearby.

Taken with other images of children that Ingram’s camera gazes unblinkingly on, there is a sense that these children (as in the films of Peckinpah) are absorbing the horrors of violence; and when the Four Horsemen ride off into the clouds at the end of the War – and the film – we are left in no doubt that this is something that is going to be repeated over and over again.  And perhaps for as long as humanity exists on this planet.

Very far from being dated, The Four Horsemen of the Apocalypse appears today like a savage and bitter commentary on our own benighted times; and one in which the mystical vision of Rex Ingram and June Mathis gelled perfectly.

It was a pure privilege to see this monumental work in the splendid surroundings of St. Patrick’s Cathedral, Dublin; and it was in the company of an audience who really wanted to be there.  No distractions.

The musical accompaniment (at its best in the chilling lead-up to the Intermission) was by Matthew Nolan, Barry Adamson, Seán Mac Erlaine, Adrian Crowley and Kevin Murphy.

And particular thanks to Mathew Nolan whose love of silent cinema and admiration for Rex Ingram’s film helped to make this screening possible.