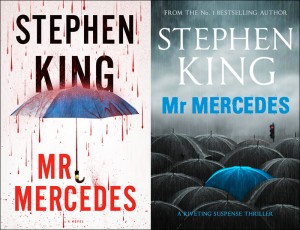 I can still remember how creeped out I was in 1992 when he wrote the screenplay for a movie (directed by Mick Garris) called Sleepwalkers.  Its main character was a guy called Charles Brady who was having an incestuous relationship with his mother, Mary.  Mind you, the guy was also a murderous were cat, since you ask; but it was the name of Charles Brady that got me.  For obvious reasons.  It’s weird seeing your own name in that context.

Well, that and the fact that I’m a cat-person.

Anyway, here he is back at it again, this time with a straight crime thriller; but it features a 100% psychopath called Brady Hartsfield and before you can shake a copy of Freud’s Dissolution of the Oedipus Complex at him, King reveals that good old Brady is having an incestuous relationship with his alcoholic mother, Deborah Ann.

Still, it’s probably a good thing that he has something to differentiate him – because almost every single person in this novel is straight out of Central Casting.

Yeah, I can’t believe I’m writing that either.  If I had been paid by the hour over the last forty-odd years for the defense I’ve put in on my belief that King is a great writer, then I’d be a wealthy little camper.  And one plank of that defense is how wonderfully whole are the characters he creates.  When one of them dies (as they tend to in his work) by God, do you feel a real sense of loss!   Think Cujo; think Bag of Bones; think The Stand and countless others.

Yet here they were so totally clichéd that it was impossible to take any of them seriously.

The story centres on Kermit Bill Hodges, a retired detective who (get this):

Any of that sound familiar?  You know, from a thousand other cop shows and movies.

He is called away from his television programmes, where he has been sitting putting on thirty pounds (don’t worry if you miss that detail because it will be repeated on nearly every page), by the arrival of a taunting letter from the Mercedes Killer, he of the unfinished last case.

Despite the fact that he’s 65 years old, practically Face-Down in Norma Desmond’s Swimming Pool and horrendously overweight (seriously, King’s descriptions of this Cardinal Sin get more and more outraged) he manages to hook up and immediately fall in mutual love with a glamorous, wealthy, fortysomething who buys him a Fedora hat (no comment) and is only gagging for it.

Which leads to some rather odd sex:

‘They fall onto the bed, Hodges still in his boxer shorts, Janey in cotton panties as plain as her bra.  He tries to roll her onto her back, but she resists.

‘”You’re not getting on top of me”’, she says.  “If you have a heart attack while we’re screwing, you’ll crush me.”

‘”If I have  a heart attack while we’re screwing, I’ll be the most disappointed man to ever leave the world.”

‘She hooks her thumbs into the sides of his boxers.  He cups her hanging breasts as she does it.

‘He’s able to obey both of these commands with no trouble; he’s always been a multitasker.

‘A moment later she’s looking down at him, a lock of her hair tumbled over one of her eyes.  She sticks out her lower lip and blows it back.  “Keep still.  Let me do the work.  And stay with me.  I don’t mean to be bossy, but I haven’t had sex in two years, and the last I did have sucked.  I want to enjoy this.  I deserve it.”

‘The clinging, slippery warmth of her encloses him in a warm hug, and he can’t help raising his hips.

There’s a lot more, but you get the general idea;  in fact, I was just about to say can you imagine if you swapped the dialogue between the genders when it dawned on me that this may just be King’s revenge for the inexplicable success of the Fifty Shades series.

King’s stroll around inside the head of the psychotic Brady is much better, as you would expect.  I’m not giving anything away with this intro to the killer’s second job as it occurs quite early:

‘The niggerkid hears him coming even over the roar of the mower and turns to look.  I know your name, niggerkid, Brady thinks.  It’s Jerome Robinson.  I know almost everything about the old Det-Ret.  I don’t know if he’s queer for you, but I wouldn’t be surprised.  It could be why he keeps you around.

‘From behind the wheel of his little Mr Tastey truck, which is covered with happy kid decals and jingles with happy recorded bells, Brady waves.  The niggerkid waves back and smiles.  Sure he does.

‘Everybody likes the ice cream man.’

In the midst of the mess that is Mr Mercedes this stands out as vintage King.

Jerome, by the way, is another weird kind of beauty:  he’s an educated, intelligent 17-year old African-American who for some reason feels the need to put on a bizarre patois:

‘I has mowed you grass and put de mower back in you cah-pote.  I hopes you didn’t run over it, suh!  If you have has any mo chos for dis heah black boy, hit me on mah honker.  I be happy to talk to you if I is not on de job wit one of my hos.  As you know dey needs a lot of work and sometimes some tunin up on em, as dey can be uppity, especially dem high yellers!’

OK, I have to admit that’s pretty funny (at least to this white boy), even though it calls to the mind of the Constant King Reader the schizoid alternate personality of Detta Walker in the Dark Tower series; but there is nothing funny about Hodges’s behaviour regarding how he goes about tracking down the Mercedes Killer.

This guy is supposed to have been a top detective before he retired.  Yet he not only withholds vital evidence from his former colleagues but actually pokes and jabs disgracefully at someone he knows to be a certifiable basket case.  And you know what they say:  if you keep prodding a dog it’s going to bite you.

With every single character – even the most minor ones – a stereotype, be they hard-faced lesbian or nerdish incompetent store-manager, it is hard to believe that this was actually written by Stephen King.  Even worse, this 2014 novel is the first part of a trilogy.

For myself, I won’t be back to find out if Hodges loses the weight.  Still, after 57 novels to this point it wouldn’t be human to turn in the very odd clunker.