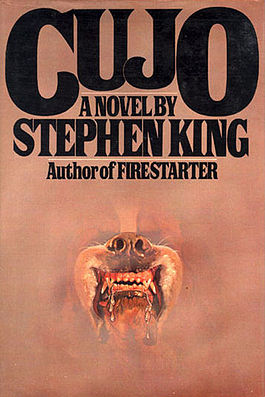 “Once upon a time, not so long ago, a monster came to the small town of Castle Rock, Maine…

“He was not a werewolf, vampire, ghoul, or unnameable creature from the enchanted forest or from the snowy wastes; he was only a cop named Frank Dodd with mental and sexual problems.  A good man named John Smith uncovered his name by a kind of magic, but before he could be captured – perhaps it was just as well – Frank Dodd killed himself…

King’s Constant Readers had been introduced to his enduring small town of Castle Rock in the serial killer subplot of The Dead Zone two years previously; but in Cujo he gives us a thorough tour of it.  And in many ways, this 1981 novel is one almost entirely made up of many subplots, all of them as engrossing as we expect from King.

There is the advertising man Vic Trenton, whose business is in trouble; and now also his marriage, due to the discovery of his wife Donna’s infidelity with a furniture stripper. This creep is almost inevitably a tennis player on the side – a breed our Stephen doesn’t seem to like very much.

(Incidentally, Donna’s explanation for why this happened is one of the most WTF? speeches I’ve ever heard; and one of those rare occasions where King’s talent for recording the way people talk completely desserts him.)

There is Charity Camber, poverty-ridden wife of abusive drunk Joe, whom she dreams of leaving before their son Brett can be infected by his old man’s ways.

There is also the strange case of four-year-old Tad Trenton’s bedroom closet.  In a nod to his 1973 short story The Boogeyman, King seems to be hinting that lurking in it is an evil not just confined to the little boy’s imagination.  There are also oddly undeveloped suggestions that the family may be in possession of a kind of ‘shining’ talent, not unlike that of Danny Torrance, he of Overlook Hotel fame.

The main scenes – and claustrophobic ones they are – take place in and around the confines of Donna’s car, which is broken down and where she and Tad are under siege by a massive and rabid St. Bernard.

In most of King’s books he manages to make the reader splutter with laughter at the same time that he is laying on the horror.  In this one, I didn’t get that so much.  This is a grim, bleak, somewhat nihilistic novel; and one of King’s characters even has a pop at his beloved Maine:

“Bad news from Maine… For the tourists, Holly thought with an angry bitterness that all the good years had not changed, it was Vacationland.  But if you came from the puckies, it was day after day of bad news.”

There are next to no overtly supernatural goings-on in Cujo.  The poor old critter himself is a good dog gone bad because of forces – or Destiny – way outside his control; and the skin-crawling bad guy Steve Kemp is not one of King’s magnificent psychos but for all his loathsomeness is possessed in truth of a shallow, pathetic, whinging little evil.

What was going on with the normally cheerful writer when this was being written?  The answer may be in his non-fiction book On Writing where he speaks openly about his addiction to alcohol and cocaine; and says at one point:

“There’s one novel – Cujo – that I barely remember writing at all.  I don’t say that with pride or shame, only with a vague sense of sorrow and loss.  I like that book.  I wish I could remember enjoying the good parts as I put them down on the page.”

I like the book too and it is of course another page turner; however, when taken with most of Stephen King’s work it is pretty much a potboiler.  And for this reader, coming back to it is most interesting for the way in which King was then building up his strange and yet mundane little town of Castle Rock.