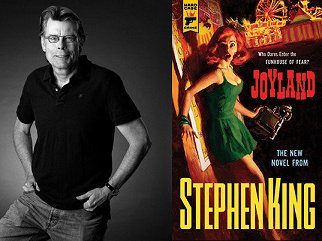 These days, you never know what to expect when you pick up a new novel from Stephen King.  Then again, perhaps you never really did.

King has always been close to being a one-man industry.  He churns out books—and quite often truly high-quality books– at a rate that many authors could only dream about.  Indeed, it may be the man’s truly breathtaking output and sheer love of the written word that has denied him the literary credit that he deserves.  Some elitist ass-pains seem to believe that unless you’re producing work at the pace of a Joseph Heller then you are not writing anything that is worthy of lasting.  Any cursory examination of King will prove that wrong, except that the nay-sayers are not willing to give him that much credit.

Yet King’s themes and beautiful embrace of his characters have been consistent since his first appearance back in the early seventies.  And few do nostalgia like he does.  I may not have been particularly knocked out by Under the Dome but, oh man, did 11.22.63 leave me wonderfully exhausted and wishing that I could have been born about fifteen years earlier, so that I could have enjoyed the fifties. I read it slowly, savouring every page, and at the end I could have read another 500 pages.

Well, compared to most of King’s enormous doorstoppers of books, Joyland is King Lite.  That’s not necessarily a criticism, just an observation.  In fact I got a bit of a shock when I picked it up, all new and shiny…and light.  These days anything under 300 pages, as this one is, makes me feel as if King has written a short story.

Still, when you hear that it is about a haunted fairground you just reckon that you can’t go wrong.  And that’s just where you would go wrong.  Some people are going to find this disappointing because it just isn’t enough of a spook show and it really isn’t enough of a thriller either.  In fact I’d go so far as to say that it could do without either of those elements and I would still have been happy to finish it—at least at the length that it is.

What it actually is are the memories of a sixty-one year old man with a lifetime behind him and recalling the wonderful summer that he spent working as a ‘carny’ at an old-time amusement park, back in the days when such things were still allowed to survive.  Think of it as a coming-of-age drama with a bit of Summer of ’42 thrown in and you can’t go far wrong.  It’s sweet and affecting and if you’re a certain age it might even remind you of a time in the seventies when you had your own heart broken.  And pick your own soundtrack.  Mine was 10cc and I’m Not in Love.  Ah yes, those were the days.  Does rejection ever taste more bitter or sweeter than when you’re a teenager?

So that’s where we find Devin Jones, 21-year-old virgin and ready for a summer at the carnival.  That’s what most of Joyland is:  Devin making friends and enjoying his life, even through the hurt.  And I was quite happy to be watching him learn the Carny Way, without really much of a story.  I also liked the digs at Disney:

“’Don’t know how you’ll feel about this place, but it suits me fine.  It’s a little old and a little rickety, but I find that charming. I tried Disney for a while; didn’t like it.  It’s too…I don’t know…’

“’Too corporate?’ I ventured.

“’Exactly.  Too corporate.  Too buffed and shiny…’”

“’The Disney parks are scripted, and I hate that.  Hate it.  I think what they’re doing down there in Orlando is fun-pimping.’”

One thing that I don’t understand is the criticism that this novel has gotten because it’s not Ray Bradbury’s Something Wicked This Way Comes. Well, it’s not; and I don’t really think that it was meant to be.  I really don’t see many similarities; and besides, this is King Lite. Bradbury’s novel is an eerie, beautiful, stone-cold masterpiece.

Take Joyland as you find it.  Don’t expect it to be a rollercoaster ride of thrills and scares.  Besides, Dr. Sleep—his long-awaited sequel to The Shining—will be along in a few months.  That should more than make up for it.

The above publishing company, who released Joyland in June of this year are rapidly turning into a company that, when I see their logo on a title, I know that I’m going to enjoy it.  They specialise in hard-boiled crime capers, both reprints of the James M.  Cain variety and originals like this. (In fact I was surprised to see that King did a previous one for them called The Colorado Kid.)

They follow through on the whole delicious pulp feel of the yarns with 40s and 50s type covers that reminded me of the kind of detective books my dad would read.  They all seemed to have covers like this one:  a beautifully painted rendition of a redhead with a short green dress and just the right amount of cleavage.  All this to a background of carnival rides and a blurb that says:  Who Dares Enter the FUNHOUSE OF FEAR?

Perfect; but one more thing:  I do wish that Stephen King would stop writing blurbs for every damned book that is sent to him.  He is becoming the whore of blurb-writers.  Come on, man, it’s not like you need the money!  Hell, he’s even written blurbs for Peter Straub—his sometime co-author.  Now, really…

One of these days I’ll pick up a book BY him and there will be a BLURB by him on his own cover, I kid ye not!  Enough! 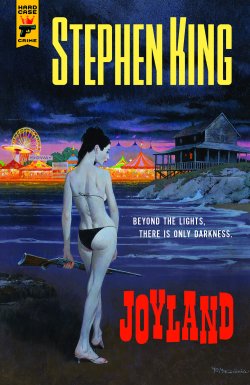