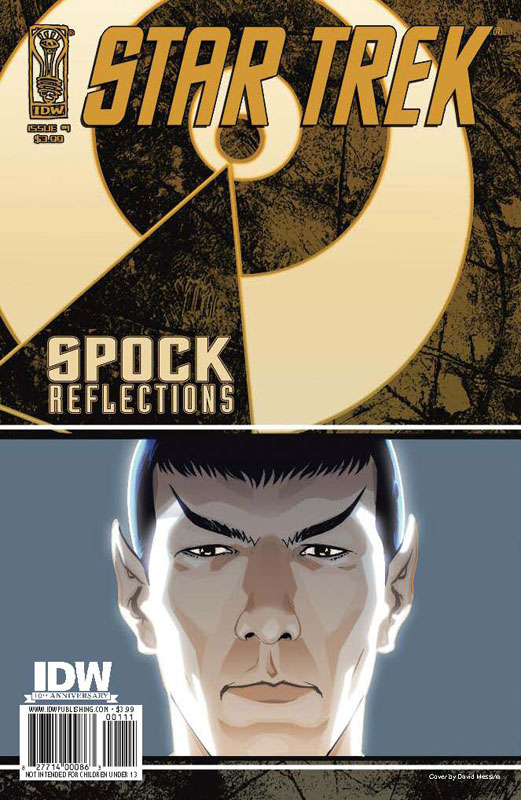 First appearing in 2009 as a four issue mini-series and released as a graphic novel collection from IDW at the start of the following year, the first thing to say about Spock:  Reflections is that it is an enjoyable read.  And yes, I’ll get to the ‘but’ in a moment.

It is written by Scott Tipton and David Tipton, with layouts by David Messina and inked by Elena Casagrande, Federico Manfredi and Arianna Florean.  It is coloured by Illaria Traversi – and the entire production is simply gorgeous to look at.

It’s not the first time that I’ve banged on about this, but it really is false advertising to present something like this collection – no matter how good it is – as anything even approaching what could legitimately be called a novel.

At the very best – and to be as generous as possible – this is a decent short story.  Or far more honestly, it is a big, handsome-looking comic book.

Hell’s fire, it’s even slighter in feel than last issue’s Hive.  And to be quite frank, it’s a bit much to shell out €15 for something that you’ll go through in an hour or so.

Spock is taking a leave of absence from Romulus, where he is acting as an ambassador-teacher.  His destination is Earth, to where he is travelling covertly, on a very personal mission.  And on the way he recalls episodes from his long life:  with Captain Pike, original Enterprise captain, seventy years back; with two women with whom he was involved emotionally; with the female Vulcan Saavik, whose Federation training he has taken an especial interest in; and of course, his crucial years of friendship with Captain James T. Kirk and the crew of that famous starship, the Enterprise.

Everything about Spock:  Reflections is low-key, bordering on sterility; and the ‘crisis’ points in each issue are solved with relative ease.  There is a purpose to Spock’s journey that I won’t give away but it did give a fuller feeling to a pretty crucial piece of Trek lore that had always underwhelmed me.   It’s something that felt really flat in the particular film, that’s for sure.

Spock: Reflections is simultaneously a sequel to Generations; a prequel to the excellent IDW series Countdown (the first volume in this collection); and by extension is also a prequel to the 2009 JJ Abrams Star Trek.

Much of it is like watching a French 60s Art movie:  long pauses in the shape of silent panels, followed by brief snippets of dialogue that we’re supposed to find profundity in.

And in fact there were a couple of instances when I did find it rather moving:  one is when Spock is telling Captain Picard to appreciate the moment in time that he is at; the great team he is working with; and the friendships that are being forged:

“Treasure these days, Picard, for when they cease, you will not see them again.”

“Mine was a life of solitude and duty… I have no regrets.”

I doubt that there could be a finer epitaph for Mr. Spock.

In July of 1969 Gold Key brought out the fourth of its Star Trek comics, the first being in October of 1967, so they weren’t exactly flooding the market.  The time between issues was getting shorter, though.

The Peril of Planet Quick Change is yet another wonderfully over-the-top and garish offering from writer Dick Wood and illustrated by Alberto Giolitti.  And the emphasis is also on Mr. Spock here.  The liner notes in these volumes so far haven’t been overly informative, but here they mention that, as this issue hit the stands, the actual show ended its third and final season.  So the pages of Gold Key were going to be the only place you could get your fix for the foreseeable future.

I also found this of interest:

“[Gioliitti] would remain the main artist on the Gold Key comics through until the mid-1970s, working on more than thirty issues of the series.  Giolitti’s European art style is distinctive, with his visions of striking alien vistas exceeding anything that could be produced on contemporary television.  However, Star Trek had not aired in Italy at the time he was drawing the comic, and so most of his reference materials were based on only a handful of production photos, leading to much more mechanistic portrayals of the interiors of the Enterprise and unusual sights, such as Starfleet-issue land rovers and drafting tables!”

Far from holding these golden oldies in low esteem I find myself admiring the writers and artists for the limitations they were laboring under.  If you just accept these tales as taking place in a sort of alternative ST universe, there is much to enjoy them.