Star Trek: The Next Generation – Hive

Home » All Posts » Star Trek: The Next Generation – Hive

Star Trek: The Next Generation 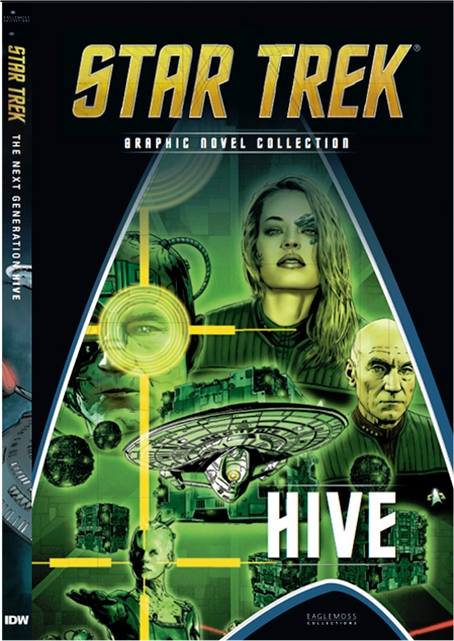 I had really only intended to comment on the first couple of volumes of the Eaglemoss Collection of Star Trek graphic novels; but I’m finding them weirdly addictive.

As mentioned previously, I wouldn’t be a huge Trek fan outside of the movies, although I seem to have absorbed more info than I had thought, probably through a form of osmosis mixed with sheer longevity, having been around a bit longer than the half-century old franchise.

The excellent first volume gave us a post-Nemesis/ pre-Abrams story in Countdown; and the second dealt with a classic episode from the end of Season One of the original five-year mission in the 60s – The City on the Edge of Forever.

So, having given us Kirk, Spock and the Classic Crew and then thrown in a sprinkling of New Generation, we now go full-warp NG, with Seven of Nine from Voyager to boot.  It all leaves me more than a bit in awe of how the hardcore Trekker keeps so many characters and timelines straight in their heads.

And talking of challenging timelines…

Hive reprints the four-issue IDW series from 2012 and the setting is once again several years after the events of Nemesis.  It starts off, however, 500 years in the future 29th century, or at least a version of the 29th century.  Here the Borg has completed their conquest of the galaxy, under their Queen and her consort, Locutus – who once upon a time was Captain Jean-Luc Picard of the starship Enterprise.

Locutus is dissatisfied in victory , believing that the Collective has failed and that it is now stagnating.  Along with a reconstructed Data, he intends to kill his Borg Queen and travel back 500 years, where he will give his former self a chance to change the future.

The story is by Brannon Braga (ST:  Voyager; ST:  Enterprise, as well as the movies Generations and First Contact) and the script is by Terry Matalas (Voyager and Enterprise associate producer) and Travis Pickett, writer on TV’s Terra Nova and 12 Monkeys); and it fairly tears along.

In fact, despite its 88 pages, you’ll buzz through Hive in no time at all.  With its zipping back and forwards in time it may have aspirations of epic grandeur but the truth is that it feels more like a TV episode.  Having said that, I enjoyed it a lot.  There are little bits thrown out that clued this novice Trekker into things he wasn’t aware of.  Like when Stryker says of the Borg Queen:

“She wants you, Jean-Luc.  She won’t rest until you’re by her side.”

To which Dr.  Crusher adds:  “You do have that effect on women.”

There you go.  I had no idea that there was a bit of a frisson between the rather fanciable Doc and old Picard.  In fact, he’s also presenting the Other Baldy Fella to some lady called Vash, with whom he appears to be what young folk today call ‘fuck buddies.’  And there’s something else I didn’t know:  somewhere along the way Jean-Luc seems to have turned into the James ‘Leg-Over’ Kirk of his Generation.

The art is by Joe Corroney and in contrast to the polished perfection of Volume 2 it has a rough-and-ready, functional feel to it, with a great many splash pages.  Yet in many ways I preferred it, which will tell you what a contrary old bollox I can be at times.

Again, I’m puzzled that typos are let through in a quality production like these books.  Or outright mistakes.  For example, we are told that Gold Key’s third Star Trek issue, Invasion of the City Builders was released in 1969.  It was in fact 1968.  That’s just annoying.

Written by Dick Wood and with artwork by Alberto Giolitti, I once again enjoyed this ancient piece of hokum immensely.  It is as pulpy as the title suggests and obviously the creators still weren’t entirely down with the programme.  An unexplored planet in deep space?  This is where the good old translators would come in handy, right?  Wrong.

Instead we are told that ‘the aliens come into the open; and… Kirk speaks in the interplanetary language Esperanto’.  Blimey.  How Esperanto spread to even untouched planets would make an interesting tale in itself.  It also made me realise that this real-life language was obviously considered in the 60s to be something that was really going to grow.  In Philip Jose Farmer’s 60s Riverworld series, it is also the go-to language of universal communication.

I wonder what ever happened with it.

I would imagine that for Trek-heads this third volume is another must-have.

Star Trek:  The Next Generation