Star Trek : The City on the Edge of Forever

Home » All Posts » Star Trek : The City on the Edge of Forever

The City on the Edge of Forever 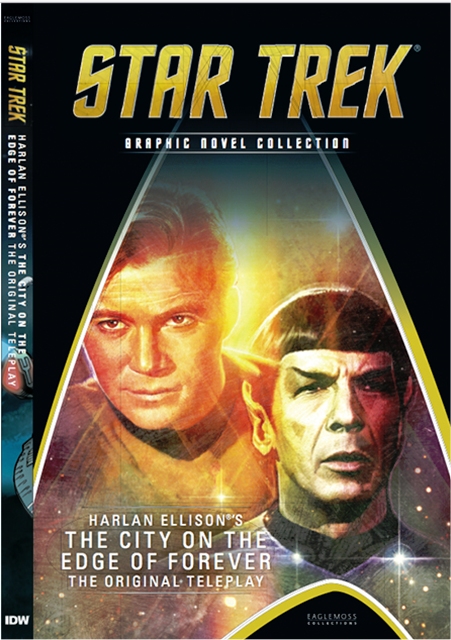 Sooooo…here we have the second volume in the Eaglemoss Collection of Star Trek graphic novels.

Their initial one – Countdown, reviewed on this blog – was an absolute cracker.  And with the second outing carrying that title I was all set to be writing that this was even better.

The overall package and presentation is indeed once again simply mouth-watering.  Although, having gone to this much trouble, one could have wished for a few less typos.

But is it better?  Well, you would think that you simply couldn’t go wrong here:  this reprinting of the five issue mini-series is a pure labour of love, with eye-popping art and a level of enthusiasm that just pours off the page.

And add to that it is the Harlan Ellison award-winning episode that was the penultimate one of the first season of the original show, back in 1967.  It is consistently voted as one of the most popular the show ever aired and, although it’s many years since I saw it, I have fond memories.

Briefly, Spock and Kirk travel back in time to the Depression years.  It is imperative that a peace campaigner called Edith Keener (played by a very beautiful Joan Collins) should die.  If she doesn’t then America will not enter World War II in time to defeat Hitler.  And all of history will be changed, including the Enterprise never having existed.

Now, that sounds like the kind of S-F yarn you heard a thousand times.  But this was a staggering 50 years ago and it was the first time that Kirk fell head over heels for a woman.  In episodes to come that happened every other week.  Green, black, yellow, checkered – it didn’t matter, because Captain Kirk was always up for it.

Yet here it felt real.  You sympathised with his no-win situation.  And it was a great episode.

The ever-contentious Harlan Ellison, though, despite coming out of the whole thing very well indeed, never stopped moaning about how his teleplay was cut and altered by Gene Roddenberry and the TV powers-that-were.

And do you see that little ® in the title at the top?  Yep, 83-year-old Harlan’s the kind of guy who loves to sue people and boy does he avail of that right.

Don’t get me wrong, I find the guy’s personal life and trials entertaining enough in an exhausting kind of way; but I have a lot of sympathy for James Avatar Cameron who called him a parasite who could kiss his ass after Ellison sued him for supposed similarities between The Terminator and his story Future Soldier.

Here is the unadulterated original, told as if it had actually been filmed for that first season.  And it is endorsed with huge enthusiasm by Ellison in an introduction that allows him to do his usual schtick of telling you what a great guy he is whilst still managing to revel in his well-earned reputation for being a rude, obnoxious prick.

The big surprise is that I came away from it feeling a hell of a lot of sympathy for Roddenberry and the ‘sixties TV sponsors!

I hadn’t read the original script — despite it being around for years and even winning a separate award — and I was expecting some kind of butchered masterpiece, destroyed by philistines.  Instead, I found myself feeling that so much of it just didn’t sound like the characters I knew.  Here’s Spock, getting all emotional about how nasty the human race was in 1930:

“Barbarian world…!  As violent as any aboriginal world we ever landed on.  I would call this anything but ‘safe’.  Barbarians…!

“My race never languished in such ignorant behaviour for thousands of years. We went to space in peace.  Earthmen came with all of this behind them.”

Now as I said it is many years since I saw the episode in question, so maybe some or all of that made it in.  I can’t remember.  But to me it just doesn’t sound like Spock.

As for the dealing of hard drugs on board the Enterprise…ah, come on.  Ellison may talk about his ‘vision’ for the piece that he was hired and paid good money to do, but Trek was really Roddenberry’s vision through and through; and that sure as hell didn’t include drug-dealing Federation crew members.

And I approved of the fact that Ellison’s script was changed to make Doc McCoy the one that Kirk and Spock are pursuing to the past.

And I preferred that the janitor’s scenes were replaced by more business with Keeler.

And I hated it that the entire cameo from Ellison himself (!) took me completely out of the story.

And…look, I just wasn’t that crazy about this tale.  And I really expected to be.

Yet it is still worth buying this, after all of that.

You can just tell that everyone involved wanted to make something really special, with the adaptation handled by Scott Tipton and David Tipton.

The beautiful artwork is by J.  K.  Woodward and there is 100 gorgeous pages of it.

And here I go again, sounding like the original Moaning Minnie…that was part of the problem!  Even without reading the annotations which are provided elsewhere in the volume it is easy to tell when the artist is drawing or painting friends – and I did really weary of the endless in-jokes for those familiar with Ellison’s work.

I’ve just realised that this may be my difficulty with it:  whereas the first volume’s Countdown was a page-turner of a tale with outstanding art to boot, City… comes across as a coldly intellectual exercise that sounds exactly as preachy and phony-outraged as Ellison himself often does.

I’ll give him this, though, and it’s a biggie.  Even back in the ‘sixties he was writing parts for women a hundred times better than most could.  Here his Yeoman Janice Rand (for whom I confessed my unrequited young love a few weeks ago) is presented so much better than she ever was on screen:  strong, capable and someone you would want next to you in an emergency.  One panel in particular [chapter 2, panel 4] is an extraordinary rendering of steel determination, toughness and beauty.  No wonder Scott Tipton says that the original art hangs in his library.

Talking of libraries and in spite of my bitching, I am delighted to add this to my shelves.  These are just personal opinions and the truth is that The City on the Edge of Forever should be read by anyone who calls themselves a Trekker or even just those with an interest in comic-book art.

Once again the back-up story comes from the Gold Key archive.  Star Trek #2 appeared in 1968 and The Devil’s Isle of Space has the same kooky charm as the first issue, only more so.

Written by Dick Wood and drawn by Nevio Zeccara it belts along at a happily mad pace, ignoring as many of the Laws of Physics as it feels like and handing out a good old-fashioned piece of pulpish space opera, with not the slightest hint of delusions of grandeur.

In many ways I preferred it to the main feature.

And if Harlan Ellison® doesn’t like that he can kiss my ass.

Harlan Ellison®’s The City on the Edge of Forever