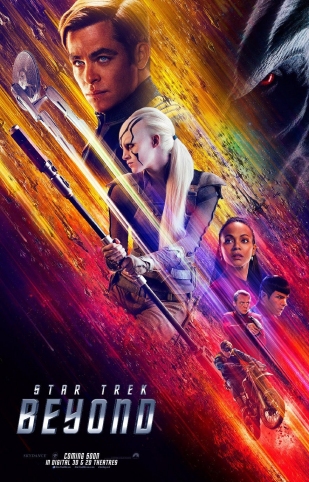 It’s almost three years into the Enterprise’s five-year mission to boldly go — and Captain James T.  Kirk (Chris Pine) is having one of those existential crises that I get when I look in the shaving mirror every morning.

What’s it all about?  Is it worth going on?  Why do I put myself through this?

Well, it’s not quite the same because he’s in charge of a Federation Starship and is not only responsible for hundreds of crew members, but is also Earth’s representative when meeting and coming to agreements with alien life forms.

Of a STAR SHIP.

What’s this guy moaning about?

Anyway, he is; and he’s pretty much decided to pack in the star-roving, settle his ass into an Admiral’s chair and turn over his job – that most of us would kill for – to Mr.  Spock (Zachary Quinto).   However, before he can make a final decision the entire universe is threatened by an extremely pissed-off creature called Krall (Idris Elba).

A Snowglobe in Space

With that we are right into what I love about the Star Trek series:  we get some real insights into the relationships between the crew as well as an absolutely humungous, splendiferous gigantor of a star-spanning threat that has me making up words as I go along.

And let me tell you about this place called Yorktown.  It’s too utterly huge to be called a space station or even Starbase and is more a sort of rest-stop-cum-city hanging in deep space like an enormous…well, like a huge snowglobe, as Dr. McCoy (Karl Urban) so accurately puts it.  It is breathtakingly beautiful, seemingly fragile and plain lovely; and I could have done with director Justin Lin just slowing down for a minute to let me take in the awesome sight of the Enterprise gliding in to dock.  Surely this is one of the most delightful and splendid moments in all of Trek history and destined to become a favourite part of the lore.  I just would have liked time to drink it in a little more, that’s all.

I don’t know Lin’s work on The Fast and Furious franchise but he really does seem to be afraid that a moment of reflection leads to boredom, because the way his cameras glide dizzyingly around the place certainly is…fast and furious.

At times I was left with the feeling that I had actually missed some scenes, as in when the ship leaves Yorktown for a nearby nebula.  One minute they’re at rest and the next in the midst of an all-out attack which destroys the ship.  And all of this is done at the start of the movie.  Whew.  Let me catch a breath here.

The destruction of the Enterprise is at this stage just another day’s work and we simply aren’t affected by it (although it is damned impressive) as much as we were the first time.  Or the second. Or the third.  Or the fourth.  You know — it’s just the demolition of the Enterprise; there’ll be another one along in a minute.  And in fairness this is a new timeline so we’ll say it’s the first.

This leaves the crew stranded –very effectively, in different groups – on the hostile planet where Krall is shacked up.  And if you really must get stranded on a hostile planet it’s handy to make it one with a nice, breathable earth-atmosphere and gravity.

And if you think that I’m griping here, I’m not.  It’s these little touches that make Beyond feel quite often like an old episode of the original series.  The logic-jumps and coincidences all conspire to make everything work, for some reason.

And that’s in large part due to the very good script from Simon Pegg and Doug Jung.  It really feels like a story written by fans, for fans.  Unfortunately, one of the side effects of this is that Pegg, who plays Chief Engineer Montgomery Scott, gives himself a much bigger part and waaay too much dialogue in a hokey Scottish accent. I mean, this guy is only short of shouting “It’s a braw, bricht moonlit nicht, the nicht” and pulling out the bagpipes whilst stuffing himself full of haggis.

Pegg must have prepared for the part by listening to Billy Connolly day and night; but despite this being centuries in the future I haven’t heard some of these colloquialisms in years – and I am Scottish.

Still, the cast are just great.  Pine and Quinto really and truly inhabit these roles now; and to me Urban is just a joy as the glass half-empty Bones McCoy.  Zoe Saldana is also very comfortable in the role of Lieutenant Uhura.

A new cast member comes in the shape of a tough young alien who has been surviving on the planet and whose family was wiped out by Krall.   This is Jaylah (Sofia Boutella) and she got me thinking about how even very alien-seeming women in Trek land seem weirdly fanciable.  Take a look at Lydia Wilson as Kalara for instance.  Hell, she looks as if she has just escaped from a Star Trek convention but there’s definitely something about her.

[Still, if like me you prefer the more mature lady, it is a pleasure to see the great Shohreh Aghdashloo as Commodore Paris.  Man, that accent alone.]

What the hell was I on about?  Oh yeah…Idris Elba as Krall, like Oscar Isaac in X-Men:  Apocalypse before him, turns acting in a mask into a virtue with every strangled, agonized vowel.  And the origins of Krall and his hatred are genuinely intriguing, making him a million light-years from the standard bad guy.

And when director Lin gets over his coffee-and-sugar rush and puts away the amphetamines he actually handles the quieter moments pretty well.  One in particular, dialogue free and involving an absent friend of ours, is both subtle and – I found — deeply moving.  Which comes as a surprise so soon after the now-famous gay outing of Sulu (John Cho), which appears to have been battered in by a guy with a lump hammer, complete with approving looks from Kirk.

So…not quite the Trek of yesteryear in many ways, but perhaps that’s no bad thing for a new generation.  I wasn’t yet ten when I saw the first episode but even then I was aware that here was a show that wasn’t talking down to me.  Unlike Lost in Space there were no quirky robots, no cute kids and no eccentric cowardly lion professors.  Instead there was a Russian (weren’t they the enemy?) and a guy with pointy ears who looked like the Devil himself.  Probably lost on younger fans now, but this was pretty groundbreaking stuff.

I could perhaps have bit of a gripe about how badly-lit some scenes were (surprisingly and puzzlingly so) but that was made up for by really beautiful use of Michael Giacchino’s music.  Anyway, I don’t feel like bitching today.

And at the end of Star Trek Beyond, when the ‘To Boldly Go’ speech is given a damned fine airing one more time, this old Trekkie had something in his eye and doesn’t feel a bit embarrassed about it.  As 50 year anniversaries go, this wasn’t a bad one.  Here’s to the next 50.

Star Trek Beyond is dedicated to Leonard Nimoy and Anton Yelchin (Chekov) who died shortly after the making of it.