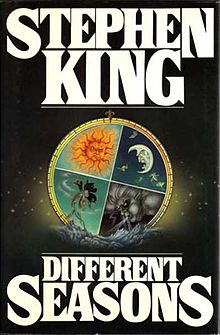 Reading this collection of four excellent pieces in 2017 is a very different experience to having read it back in 1983, shortly after its initial publication.

It’s not that my opinion of Stephen King has changed much; if anything, I appreciate him even more now than I did then.  Rather, in what is surely a unique case, three of the collection’s four stories were turned into films that are actually better than the source material – and those sources themselves are terrific.  Now that just has to be unusual, to say the least.

Rita Hayworth and Shawshank Redemption needs, as they say, no introduction.  Frank Darabont’s superb film of a man wrongly sent to prison for murder now features regularly – despite its lukewarm reception on release – in the top five of many people’s lists and is indeed a recognised classic.

It feels odd reading this story 35 years on, though.

It comes as a bit of a jolt when revisiting this excellent 100-pager to realise that, for example, the character of ‘Red’ is actually a white man with red hair and not Morgan Freeman with his Voice of God.

There no one particular warden deserving of his come-uppance; several are in charge of Shawshank Prison during the incarceration of Andy Dufresne.

Nor is there the imagery that makes the film such a strangely Christian one in tone:  quite apart from the numerous Bible references in the film, there is nothing approaching the marvelous scene where Dufresne re-emerges into a thunderstorm, having crawled through a tunnel of shit, to open his arms and be re-baptised in the rain.  Born again.

Quite simply put, King’s original is near to perfect; but Darabont’s crucial additions turn the film into something on a quite different plane altogether.

Bryan Singer’s film of Apt Pupil, the second story (a novel in itself at 200 pages) is likewise respectful of its origins whilst still somehow improving on them.  I must confess to feeling a little queasy with this harrowing tale of a clean-cut All-American boy who has a truly sick fascination with Nazi concentration camp history; and who finds himself in a position to blackmail an ageing camp butcher into telling him all the details of his dreadful past career.  It seems to have been inspired by the real-life Charles Whitman, another All-American who became the Texas Tower Sniper in the 60s.

It is truly the sheer undiluted power of King’s storytelling that keeps you reading about these two complete monsters – and yet Singer’s approach is in many ways…well, perhaps an improvement; but certainly more subtle.

My favourite from the collection is The Body which was likewise made into one of my very favourite films:  Rob Reiner’s marvelous elegy to childhood, Stand By Me.

Unlike Ray Bradbury’s great but idealized odes to childhood, King’s 1960 characters talk and behave pretty much as I remember my friends and I doing – leaving aside the fact that we never hiked cross-country to look at a kid’s corpse.  But only because the opportunity never arose, come to think of it.

These three stories are all loosely linked into King’s wider mythology:  Dufresne is the banker who invested on behalf of the Nazi;  and his fictional town of Castle Rock ties together Shawshank and The Body.  They are also linked by subtitles to the changing seasons:  Hope Springs Eternal, Summer of Corruption and Fall of Innocence.

It introduces us to a mysterious club, where a group of wealthy people gather to tell tales.  The actual tale told here is a cracker; but in many ways the section that deals with the Club itself is even better – and genuinely unsettling.  If it was meant as the beginning of a series, which it certainly reads like, I’m not aware of any additions to it.  Pity.

In his afterword (worth buying for alone) King remarks that each one was written after completing a major novel, when he still had some gas left in the tank.

Which, to be honest, leaves me more in awe of the man than ever.