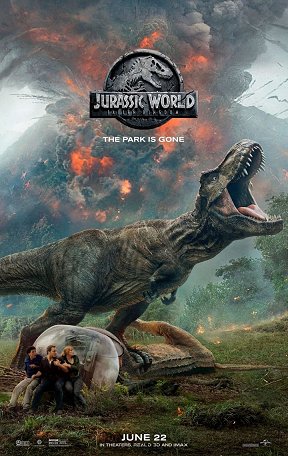 ‘’They’d all be dead by now, right?” asks one of the mercenary DNA-scavengers at the beginning of this fifth installment, as his team maneuver a small submarine into the lagoon that was home to the Jurassic theme park’s enormous Mosasaurus.

What these guys are searching for are the bones of the hybrid Indominus rex from the previous outing.  And while good old Indominus is definitely not going to be doing any more damage, we know – because we listened to Dr. Ian Malcolm (Jeff Goldblum) ’way back when – that Life always finds a way.  Something nasty is about to happen to them; but that’s OK because they’re bad guys.  And Jurassic World:  Fallen Kingdom is one of those films that just bludgeons you over the head with a black-and-white palette.  Sure, yes, screenwriters Colin Trevorrow and Dereck Connolly pose some initially intriguing questions on the morality of genetic modification and our ethical responsibility towards creatures that we have created, but in the end director J. A. Bayona is more interested in getting right on with the action.

And as to the film’s many, many bad guys, they are almost wearing black hats, holding their cigarettes between thumb and first finger while cackling like someone in an underground lair:  “We expect you to die, Mr. Bond!”  Truth to tell, in the film’s second half I wouldn’t have been at all surprised to see the world’s most instantly recognizable ‘secret’ agent turn up with a load of gadgets from Q.  Oh and in case we’ve forgotten, we’re tipped off once again that slimy foreign arms dealers do not know what razor blades are.  They may be spending tens of millions on high-tech weaponry but the concept of shaving off stubble has completely passed them by.

It really is a mixed bag, this film.  J. A. Bayona made his debut with the Spanish horror film The Orphanage and his vision of the Jurassic world is very much rooted in horror movie atmosphere and imagery.  And that’s all to the good – in fact, at times it’s pretty damned great.  But he’s a bit hampered by not seeming to be allowed to stray too far from what we’ve seen before.  In fact, an awful lot of the stuff here is less homage to the earlier films than outright steal.

It is also very much a film of two halves:  the first one reintroduces us to Claire Dearing (Bryce Dallas Howard), whose experiences of three years previous have transformed her from Corporate Whore into a much more likeable dinosaur-rights activist.   The dino-island of Isla Nublar is about to play host to an extinction event in the form of an erupting volcano, so she’s got a lot to be active about.  And as the world’s governments decide to take a tough-shit-on-the dinosaurs vote, Claire and her old boyfriend and ‘raptor wrangler Owen Grady (Chris Pratt) go in to save the day.

The film rarely pauses to draw breath here, and the special effects are as incredible as we’ve come to expect, although it is inevitable that by now the feelings of indescribable wonder we had with Spielberg’s initial outing are somewhat diluted.

And they have along for the ride a systems analysis expert called Franklin (Justice Smith) for some misguided comic relief.  This guy is so annoying in his constant bleating about whether or not he is going to get eaten by T-rex that I nearly looked back with nostalgia on Claire’s irritating nephew from the previous film.

The second half, which finally sees the creatures leave the island completely, descends into (bad) comic book silliness, with Toby James as some sort of auctioneer intent on selling the dinosaurs off and damn the consequences.

Throw in a ridiculously confused backstory involving an ex-partner of John Hammond, played by James Cromwell, his granddaughter, and Geraldine Chapman as the kid’s nanny and it’s really a bit of a mess.  I’m assuming that this is going to have some kind of role in the third part of the World trilogy – already with a release date — or else I don’t know why they bothered at all.

However, Fallen Kingdom has one of the most beautiful and poignant images from any of the five films, when the last dinosaur stands eerily wailing as the smoke from the erupting volcano surrounds it around the half-way mark.  It is a wonderfully affecting moment.

Towards the end I was thinking that the whole franchise had become a bit stale and there is indeed a feeling of tiredness about it, despite the impressive action; but then the film takes one final turn and we realise that we are going in a completely different direction for Fallen Kingdom’s sequel.

And it’s a direction that ensures that I’ll be back for more.  We really are about to enter a Jurassic World.