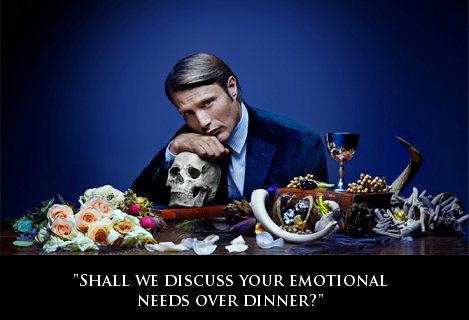 When I was a young fella the word ‘cannibal’ would generally be associated with the cartoon image of a big African native with a bone through his nose and a missionary in a bubbling cooking-pot.  In the last twenty or so years, of course, it has been almost impossible to hear ‘cannibal’ without seeing a photo of Anthony Hopkins staring through the bars of his cage with a rather disconcerting and enigmatic smirk on his face.

The character of psychiatrist Dr. Hannibal Lecter has been made very much his own by Hopkins.  He did so over the course of three films:  The Silence of the Lambs, Hannibal and Red Dragon, all based on the bestsellers by Thomas Harris.  And with the exception of the much-maligned (and yet my favourite) middle film he did so with relatively little screen time.  But so great is his presence—and he is one of the great modern monsters—that he is the character that we remember.

In fact, there had been an earlier incarnation of Dr. Lecter in Michael Mann’s Manhunter, an adaptation of Red Dragon, which cast the excellent Scottish actor Brian Cox as the doctor.  But as good as Cox was (and many people prefer this film to the remake) it was to be Hopkins that became identified with the role.

With that in mind it took a big decision to develop a 13-part series that re-imagines the period in Lecter’s life that leads up to the events of Red Dragon.  Despite his more feral depiction in that movie and book (chronologically the first of the series) I will always choose to imagine Dr. Lecter as a rather stylish and cultured gentleman who just happens to have quite an unusual hobby on the side.  So it is probably my own limited imagination that is making it hard for me, in fairness after only three episodes, to take to Danish actor Mads Mikkelsen in the title role.

The series Hannibal, which debuted in America last month (April 2013), opens with Will Graham (Hugh Dancy) explaining to a group of students his methods in profiling killers.  It’s obvious right from these first frames that this series isn’t going to go for the subtle approach as we see blood-drenched corpses and gore-encrusted surroundings whilst we learn something of the near-magical manner in which Graham can put himself into the crime scene.

As the class concludes Graham is approached by Special Agent Jack Crawford (Laurence Fishburne), who is head of the FBI Behavioural Sciences division and is attempting to recruit him to help in hunting the down the killer of eight girls.

During the ensuing conversation it becomes obvious that Graham has been very badly damaged by his experiences in the past.  He is socially awkward and when asked to describe himself to Crawford answers:

“My horse is hitched to a post that is closer to Aspergers and Autistics than it is to narcissistic sociopaths”.

Nevertheless he comes on board in order to track down a psychopath who seems to believe himself to be benign—an odd development that leads to some speculation from Crawford that no doubt the television audience was going along with.  And when it becomes clear that Graham is very much on the edge (and may be pushed over it by the rather ruthless Crawford) Dr. Hannibal Lecter is brought in to keep an eye on him.

Needless to say, and of no surprise to the viewer, Lecter has his own strange agenda, which at this point is unclear.

I have no wish to give away anything else of the plot but I will note that this series may just become known for some startling images:  here in this opening episode it is the grotesque sight of a naked girl impaled on a stag’s antlers.  And in the second there is a truly bizarre and disturbing image involving mushrooms that is likely to make the most jaded watcher of horror shows sit up straight.

As I put away episode three I’m not sure that I want to continue with Hannibal.  It may be that it is too soon after I watched the first two seasons of the American version of The Killing. I was so utterly engrossed in it that I may have just taken on a new one too soon.

But I don’t think that is the only reason that I’m not connecting with Hannibal.  So far (and I have no doubt that this will change) he is pretty much simply Will Graham’s side-kick.  Perhaps the makers should have given it another title, something a little more representative.  Will himself is an interesting character and I must say that I find Hugh Darcy’s looks and mannerisms strangely reminiscent of fellow actor Hugh Jackman; but considering his character’s huge empathy with serial killers wouldn’t he be just a little bit put out by Lecter?  With his horrible side-shed, occasionally half-shaved face and weird lips he just has to walk across the room to give me the creeps.  As for trusting him with your secrets…I don’t think so.

Still, it may be worth staying with Hannibal just to see the gorgeous Gillian Anderson who will be appearing shortly.  And how can you not have a soft spot for a show that credits a guy called Jose Andres as a ‘culinary cannibal consultant’ who is there to make sure that the preparation of human flesh is done correctly.  And on that note I’ll leave the last words to Dr.  Lecter himself:

“Killing must feel good to God, too.  He does it all the time; and are we not created in His image?

“God’s terrific.  He dropped a church roof on 34 of his worshippers last week in Texas while they sang a hymn…it made Him feel powerful.”

Now there’s something I’ve always wondered about, myself.