The Dark Tower 1: The Gunslinger

Home » All Posts » The Dark Tower 1: The Gunslinger 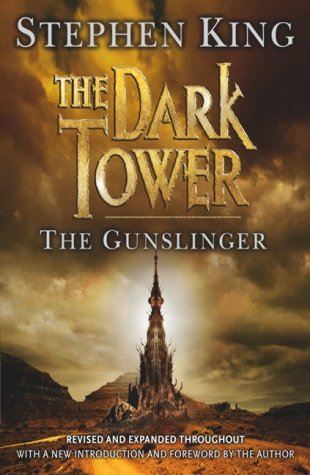 “The man in black fled across the desert, and the gunslinger followed.”

Well, that’s not quite true. I’m a life-long King fan and had tried the original five short stories that comprise this volume many years back.  (They originally appeared in copies of The Magazine of Fantasy and Science Fiction between 1978 and 1981.)  However, I found them then to be rather flat and uninteresting—and very far removed from the writer’s usual highly readable style.  So I never pursued the series, even though tantalising hints concerning this strange alternative or mirror world would occasionally appear throughout the rest of his work.

He finally finished it around ten years ago and I’ve now made a determined attempt to find out why so many people prefer this to anything else he has ever done.  Many, many readers even take the stand (ahem!) that this is the one he’ll be remembered for.

Before releasing his seventh and final volume he went back and extensively re-wrote and expanded this initial outing; and for me, in many ways I’m still left puzzled, although enthusiasts promise that the story really only gets going with Volume Two.

The Gunslinger is intriguing, there’s no doubt about that.  It’s just that some of it doesn’t really come alive for me.  Take the first and longest story, from which the book takes its title.  We meet an enigmatic—yeah, that’s right—gunslinger, who is travelling through a seemingly endless desert.  It is straight out of a spaghetti western, right down to when he strides laconically into a saloon where the piano player and the customers go silent and stare at him.  But wait a minute…the pianist is playing…Hey Jude?

This is a world just like ours and not like ours at all.  The gunslinger himself—Roland Deschain, as we will learn—is a very vivid character, even in these early pages.  Of course it helps that because of King’s introduction I was visualizing him as Clint Eastwood in his Man With No Name phase.  I also really took to the saloon owner that he starts a strange relationship with:  Allie is a painfully real woman that we wish to be happy, without holding out much hope for her.

Much more problematic is the man in black, the sorcerer whom Roland is pursuing.  I couldn’t get a handle on him at all, especially in the scene in which he brings a town burnout called Nort back from the dead:

“The man in black suddenly lunged across the body, jackknifing over it in a smooth arc.  It was pretty, like a flash of water.  He caught himself on his hands, sprang to his feet in a twist, grinning, and went over again.  One of the watchers forgot himself, began to applaud, and suddenly backed away, eyes cloudy with terror.  He slobbered a hand across his mouth and made for the door.

“Nort twitched the third time the man in black went across.”

I just couldn’t ‘see’ that; and for me that’s quite unusual in a King tale.

It is the same in the final story, where hunter and hunted meet. It never really comes alive.

Still, there is enough here to make me anticipate the second volume.  Through the introduction of Jake, which is a kind of warped take on the boy-sidekick theme, we know that ‘our’ world is very close by and that sometimes people from there (in Jake’s case, New York) pass into this similar/not-similar one.

Oddly for a book that is the first in a series I kept feeling that I had started in the middle of a story.  For example, we discover at one point that Roland has been after the man in black for twelve years already.

Yes, a strange little outing (at 230 pages that’s pretty short for this writer) but certainly enough to have me curious to see what will happen next.