Company of Liars a novel of the plague

Home » Print Reviews » Company of Liars a novel of the plague

A Rambling Review of Sorts:

a novel of the plague 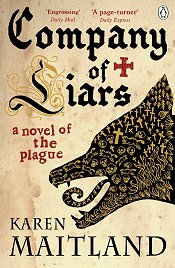 Coming close to the end of Karen Maitland’s 2008 novel, Company of Liars, I was thinking of what a breeze this book would be to review.  After all, I was thoroughly enjoying it and it seemed only a matter of getting that feeling down on paper.

Well, I finished it this morning and then took a long walk, mulling it around in my head.  (The walk was up to Renville Woods, several miles outside Oranmore Village, since you ask.)  And now, sitting at the keyboard it doesn’t seem quite so straightforward.

Taking place over roughly ten months, beginning on Midsummer’s Day 1348, this is the story of nine very different people who find themselves travelling together across the south of England, all the while trying to avoid the Plague, which has just arrived from Europe.  (Although it is never called the Plague, usually being referred to as the Pestilence.)

The story is told by a seller of phoney religious relics, who we know only as Camelot.  As he travels he finds himself gaining the company of two out-of-work musicians; a magician; a young man and his pregnant wife; a story teller who appears to have one arm in the form of a swan’s wing; a healer; and a very creepy young white haired girl whose only function seemed to me to be to read the runes and make my skin crawl.

Each of them has their secrets; all of them to some extent are liars.  And much of the relic-seller’s musing in the book is on the nature of truth and lies, especially when set against the quality that he places most faith in:  Hope.  As Camelot puts it:

“The most savage cruelties man inflicts on man are committed in the pursuit of truth.”

Like much of what Camelot says, I’m not so sure about that.

The group appear to have come together by accident and circumstance, but have they?  Or are they being deliberately weaved into a darker design?

I purposely read this book slowly.  I took only a few chapters a day and as a result had the pleasurably false feeling that I was travelling with these people.  And let’s be honest, travelling vicariously through 14th century England is the only way to do it.  Maitland is great with day-to-day details and conjures up a place full of stenches and hardship that you wouldn’t ever want to experience in reality.

Now, there are a couple of blurbs on the cover and inside of the Penguin paperback edition that are even more inaccurate than most blurbs.  I’ve said before that some of this stuff should go before the board that deals with false advertising.  But these really take the biscuit.  According to the Daily Express it’s a page-turner.  Well, it’s a very good read indeed but a page turner it most definitely is not.  There are long periods where very little happens—oddly enough, one of the book’s strengths in my opinion.

The New Statesman claims that it has “Clear echoes of Chaucer and Tolkien”; to which the only possible response can be: “Huh?  Was I reading the same book?”  Believe me, if you pick this up expecting anything resembling hobbits to be gambolling across the pages you are in for a big let-down.  And a couple of other reviewers also mention Chaucer and The Canterbury Tales.  Which leads me to wonder if they’ve ever actually read Chaucer; and also  even if they’ve just been comparing notes with each other, like some film ‘critics’ who spring to mind.

Merrily off on a Tangent

Look, I don’t know if Company of Strangers can be considered a supernatural novel or a historical one, but it sure as hell isn’t Chaucer.  Just because some characters tell a few—a very few– fairy-tale type yarns does not make it The Canterbury Tales.  But this does bring up another thing that I liked about the book:  the fact that the supernatural elements are just there.  They are simply part of the daily existence of these people.  And strangely, this acceptance reminded me of a very different book—Alan Moore’s massive graphic novel From Hell.

There is a section in the forty-odd (!) pages of notes that Mr. Moore includes, where he mentions how routinely visions were recorded in ancient historical accounts, from Geoffrey of Monmouth to the Old Testament “by way of a mass of old parish records”.  He writes:

“One account in the Roman military log tells how a column of troops had reached a river which they suspected was too fast and deep for them to cross…At this point, the log records, the Great God Pan appeared, picked up one of the herald’s trumpets, waded easily across the river and blew a fanfare upon reaching the opposite bank.  Unsurprisingly, the soldiers took this to augur that they should cross the river.”

So far, so strange.  But here Moore goes on to talk about the corpus callosum—a strand of neural gristle that connects the twin lobes of the brain and which medical research appears to indicate “has thickened and become more complex and efficient across the centuries”.

“As purely personal speculation, I would point out that in today’s world, the act of crossing a busy road is similar to the problem afforded the Romans by the river. We judge, by looking and listening, how far away the approaching cars are, which way they are coming and how fast they are bearing down upon us.  Somewhere in the depths of our subconscious an extremely complex calculation is performed at lightning speed, telling us how fast we need to walk in order to cross the road in safety…

“If we accept that in the past the connection between the two halves of the brain was less sophisticated, then presumably there would have been a different relationship between our conscious and unconscious minds.  Perhaps the subconscious of the Roman soldiers was perfectly capable of making lightning calculations as to the river’s depth and the speed of its current, but was unable to pass it to their conscious minds in the direct manner that modern brains employ.”

All of which may seem a long way from a review of Karen Maitland’s novel; except that I don’t really think that it is.

The manner with which medieval people seemed to casually take it for granted that they shared this plane with all manner of hobgoblins and sprites has always fascinated me.  Nor should we dismiss this as the beliefs of superstitious peasants, itself a ridiculously conceited point of view of a time when the Popes and their priests were spouting the most unbelievable nonsense.  (A bit like today, in fact.)  After all, undoubted geniuses such as poet and mystic William Blake accepted their visions as very real indeed.

And Moore concludes with speculating:

“Could it be that the visions of gods or supernatural figures that populate our histories are projections, messages from an unconscious that was at the time unable to communicate in any other way?”

Having gotten all that out of my system I can say that in the end I almost greatly enjoyed Company of Liars.  I doubt that many of the so-called revelations concerning the various pasts of the characters would have taken the reasonably attentive reader by surprise; but still—as I began the final chapter—I felt that this was a pretty satisfying read.  And then came the very last page.

You wouldn’t think that a few simple paragraphs could spoil the enjoyment of the previous 550 pages, would you?  Well, the damned book went flying across the room, so foully cheated did I feel.  Jesus, did no one try to talk Maitland out of this?  Is there, somewhere, an editor holding their head in their hands?  In a twist that had all the subtlety of, and made as much sense as, your average Friday the 13th ‘surprise’ ending, the author to my mind exploded everything that went before.  Disbelief that had been pleasantly suspended in the enjoyment of a tale well told suddenly rushed back, leaving me feeling that I had wasted days of my time.  Indeed, so bad did I feel that, against previous intentions, it will be a while before I can read another of the writer’s books.  And that’s a shame.  Because write she certainly can.

But oh, that ending. 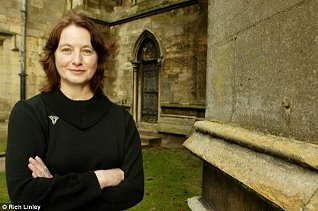