Home » All Posts » Arkham Tales Legends of the Haunted City

Legends of the Haunted City

Edited and Introduced by William Jones

An Occasional Look at Lovecraftian Anthologies: 5 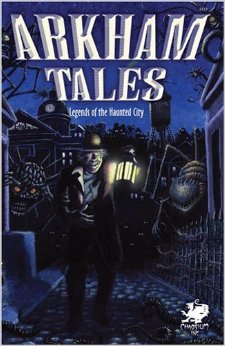 I’m not going to devote too much time to this 2006 Chaosium Inc.  anthology.  It’s not that it’s particularly bad (although it certainly isn’t particularly good).  It’s just that I’m not really the person that it’s aimed at; and as I read the introduction it quickly became apparent that I had made a mistake in ordering it:

“How is this collection of writings different from Chaosium’s other fiction books?  The answer isn’t as easy or clear-cut as it might seem.  There is more at work in the realm of ‘Mythos’ fiction than the writings of H.  P.  Lovecraft.  A vast number of authors from the past and present form the Chaosium canon.  Some of these authors influenced the development of the RPG Call of Cthulhu, while others found their muse after being exposed to the game.  Like Lovecraft’s style of blurring fiction and reality, the boundaries of ‘game’ and fiction are erased here.  Instead, what is given life in this book is the vivid world that has been created in the Call of Cthulhu role-playing universe.  This is the backdrop fashioned by those who heard a call, who desired to engage the eldritch world through the imagination, exploring it, expanding it, and keeping it alive.”

I don’t know anything about the CofC role-playing universe.  In fact, outside of a little light S&M I’ve never played any kind of role-playing game. Who knows, maybe I would enjoy them.  I’ve a feeling, though, that with my addictive Piscean personality I’d be better off taking a pass; because God knows it was hard enough giving up whisky, tequila, vodka and whatever-you’re-having-yourself.

And addictions cover a multitude, so don’t get me started.  Try being addicted to Lovecraft.

As it happens, I’ve just gone through a blitz where I had to find out all I could about Lovecraft’s fictional town of Arkham.  To that end I’ve consulted every map I could get my hands on and went through HPL’s ten source tales which comprise the ‘Arkham Cycle’. (Any excuse to re-read them.)

When it comes to summing up Arkham, the man who conceived it was pretty definite:

“My mental picture of Arkham is of a town something like Salem in atmosphere & style of houses, but more hilly (Salem is flat except for Gallows Hill, which is outside the town proper) & with a college (which Salem hasn’t).  The street layout is nothing like Salem’s.  As to the location of Arkham – I fancy I place the town & the imaginary Miskatonic somewhere north of Salem – perhaps near Manchester.  My idea of the place is slightly in from the sea, but with a deep water channel making it a port.”

So I guess if I was looking for anything from this collection it was a deepening of the whole feel of Arkham as a real place.  To steal a phrase from the brilliant horror film critic Ambush Bug (the majestic Mark L. Miller himself), I like it when a fictional universe feels ‘lived in’.  In other words, when a lot of thought has gone into making a particular environment real.  Think of Robert E.  Howard’s Hyborian Age or George R.  R.  Martin’s Westeros.  Like that.  Lived in.

Well, even with only one town and a whole seventeen stories, I never got that feel.

Taken as they are, the tales collected here are mainly lightweight.  Some – like They Thrive in Darkness, What Sorrows May Come, Mysterious Dan’s Legacy or Burnt Tea seem to be frustratingly on the verge of becoming interesting when suddenly the candle goes out.

Some – like the initially intriguing Worms or The Nether Collection (with its main character of Harry Houdini) seem to be trying to push the boundaries whilst playing with elements of the Mythos, yet once again never go anywhere.  They simply don’t do it for me.  Much as I want to applaud them for trying.

Some are just plain frustrating, such as Geometry of the Soul.  After a few pages of this I was suddenly sitting up and taking notice.  Here we were in Arkham Sanitarium, with yet another Dyer surviving yet another Miskatonic University expedition and being interviewed by a Pinkerton detective.  The whole thing was giving off a nice Hannibal and Clarice feel.

Remember HPL’s At the Mountains of Madness and you really think that writer Jason Andrew is going to run with this.  Then, as with so many of these stories, things just become ridiculous…or else simply fizzle out.

Look, as far as I know this is a labour of love from these writers/gamers so I’m not going to knock anyone.  As I say, I’m not really their audience.  (Although I will say that I think it’s incredible that many Call of Cthulhu role-players have never actually read Lovecraft.  Good God, that’s as bad as the weirdo who only reads him!)

One thing I do have to throw out there, however, is an honourable mention for Michael Minnis’s Small Ghost.

Call me strange but I’m a sucker for anything to do with Keziah Mason’s favourite pet familiar, Brown Jenkin; and anyway, Minnis utilizes some authentic Arkham lore.

I could have done with a little more of that.

NB:  In one of Life’s many odd coincidences, I had just finished writing when I chanced on this from Chaosium CEO Greg Stafford:

“In 1975 Chaosium started out as a quirky boutique game company.  We were all about creativity, artistry and craftsmanship.  With every game we provided you with new realms of imagination and entertainment.  Over the last few years we forgot that, and lost our way.  The Great Old Ones have returned…”

There’s a lot more; but I guess that will it mean more to gamers than to me.  Intriguing, though, isn’t it?

Next:  The Innsmouth Cycle.