The very first copy of Harvey Pekar’s underground comic book American Splendor came out in the States in January of 1976.  Of course it was several years later before I had any inkling that someone was doing something new in what had seemed to be exclusively a world of costumed heroes and stand-up punch-trading.  Back in those days, wherever I was living at least, it was hard enough to get your hands on a DC or Marvel comic with any kind of regularity—or even one that was vaguely current.  And even if I’d been the sociable sort, in those pre-Internet days word travelled slowly.

My first real introduction to a shop that only sold comic books was when I came across a place in a Dublin shop basement called The Rue Morgue; and who could resist checking out a place with a name like that?  It was run by two brothers who were both real fans and it was great just to drop in to chat with them whilst finding this whole new world opening up. I remember being so happy after coming across Frank Miller’s version of Daredevil. It was the first time that I realised that comics were going in the direction that I always thought they could.

Rue Morgue came out of the basement and into some sort of respectability; but the great thing was that Nicky and John were real human beings, not just geeks.  (Did that word even exist then?)  Nicky was pretty quiet but John had one of the most…eh, colourful vocabularies of anyone I’d ever met.  And he had no time for what he saw as complete idiots, often almost frothing at the mouth when it came to someone he didn’t care for.  I really liked them both.

Over the following decades I would find the odd copy of American Splendor, but as I moved through various addresses I never got into it with any kind of consistency.  Which long preamble is by way of saying that this is the first time that I have held an actual collection in my hands.  It’s called American Splendor: Another Dollar and I’ve been gratefully reading it courtesy of Galway comics connoisseur Ian Canavan.  Thanks, Ian.

Harvey Pekar was born in Cleveland in 1939 and he got the idea for American Splendor in the 70s.  He just wanted a comic-book that would chronicle the every-day life of the ordinary Joe Soap.  He himself was working as a file clerk in Cleveland Veteran’s Hospital and as his surface-simple tales unfolded readers became engrossed not only by what was happening in his life but in that of his co-workers and friends.  He considered the ordinary man’s life to be a fight for survival and “a war of attrition”, which a lot of people related to. It also didn’t hurt that the illustrator for his early work was underground legend Robert Crumb.

As the years passed he ruthlessly documented his often less-than-endearing qualities, his relationships with his three wives and his battle with cancer.  It was all done in an honest, unsentimental way.  He also began to emerge in other media, appearing several times on the David Letterman Show, having a play done about him and eventually even a film in 2003—which led to even greater interest in his work.

The collection at hand is from his later period.  In 2006 he did a four-issue mini-series called Another Day through DC’s Vertigo imprint and this particular four-issue follow-up appeared as a collection in 2008.

Pekar is in far mellower mood here than I remember him.  The grouchy, cantankerous nature seems to have been replaced with a mellower, more contented one.  And that’s rather nice, since Harvey died in 2010.  A little peace at the end?  Nothing wrong with that.

The stories are illustrated by various different artists and you can make your own mind up as to who captures Harvey best.  Of course, there’s more than one version of any human being so that may not particularly matter.  The stories themselves can be one page or fifteen pages.  The truth is that each one is as long as it needs to be.

Don’t pick up American Splendor expecting action.  There isn’t any.  What you will come across is the ordinary wear and tear of a man’s life, from breaking an arm to having trouble with your teeth.

For some reason my favourite story here is The Knowledgeable Barber.  And don’t ask me why.  That’s the whole thing about reading Pekar.  You either get what he’s on about or you don’t.  Sure, there are some stories that just seem to stop and you wonder what just happened; but here Harvey decides to go for a haircut.  Well, actually his wife decides for him.  He hates queuing but he’s impressed that the barber knows his name.  The barber also is able to chat about real estate prices and who is suffering from what.  He cuts Harvey’s hair, he chats, Harvey enjoys the experience and that’s it.  As he leaves, Harvey comments in the final panel:  “Wow, a hard-working, humane, knowledgeable barber.  And you can take that to the bank”.

Now I have no idea why I like that gentle little tale.  There’s a more understandable one with the great title of The Demystification of Idea-Generating Marketing Articles where he is reading one of his own reviews and can’t make up his mind whether he likes it or not.  On the one hand, he’s a schmuck and on the other a creative genius.  He’s a loser but also has great ideas.  Harvey decides to like the review.

In Bop Philosophy his sheer love of jazz music and immersion in it becomes almost contagious.  It’s a lovely little piece.

This collection won’t set the world on fire, but it may make you want to check out Pekar farther.  And if you do then make sure that you watch Robert Pulcini and Shari Springer Berman’s film American Splendor.  (In fact you should also watch it if you are in any way interested in Robert Crumb.)  Leaving aside the fact that the great Paul Giamatti seems born to play Harvey, it is about as good a film on the creative process as you’re likely to come across.

NB:  It’s almost thirty years since the Rue Morgue closed its door but these days it’s easy to find almost anything in the comics world.  If you’re in Dublin there is Sub-City or Forbidden Planet; here in Galway there is Sub-City, located in Corbett Court, just off Eyre Square.  Tell them I sent you.  They’ll charge extra. 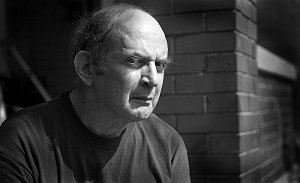