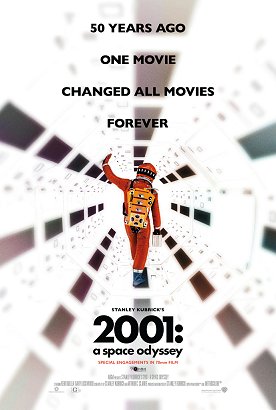 A good number of years ago, during one of its periodic returns to the big screen – something which alone points up the enduring popularity of this film – an ad campaign ran with the slogan:

BEFORE STAR WARS THERE WAS AND ALWAYS WILL BE 2001:  A SPACE ODDYSSEY.

Well, it was catchy, I’ll give it that; but it was a bit misleading.  In fact, I’d call it bloody well false advertising to lump those two together. George Lucas’s Star Wars (1977) was a great big widescreen space opera — once described by author Michael Moorcock as being ‘a dinosaur with the brain of a gnat’ — that caught the public imagination at just the right time; whilst on the other hand Stanley Kubrick’s 2001: A Space Odyssey (1968) has proved to be an enduring, deeply philosophical look at what we are as a species; what our origins may have been; and, crucially, what we have the potential to become.

On the back of that ad-line it would have been unfair to take along any but the most precocious of children to a showing of 2001, in the belief that they would be seeing another all-action outing with noisy spaceships and ray guns.  God help us, if they weren’t asleep within the first ten minutes then they would be driving the rest of us mad by playing with their zombie-phones or demanding that their parents refill their giant popcorn buckets.

Anyway, with that off my chest…

After the success of his 1963 black comedy Dr. Strangelove:  Or How I Learned to Stop Worrying and Love the Bomb  — a film about the imminent end of the world through nuclear destruction – director Stanley Kubrick wanted to make the ‘proverbial good science-fiction film’.

And as if that weren’t ambitious enough — this at a time when the genre was still reeling from attacks by giant nuclear-mutated ants and tarantulas – he wanted to make an awesome, almost religious experience into the bargain.   To that end he joined forces with one of the great SF writers, Arthur C.  Clarke; and the next few years turned into an obsession with making a perfect film.

Which, to my mind, they did.

And as 2001:  A Space Odyssey returns to cinemas in order to celebrate its half-century anniversary I can honestly say that despite many, many viewings (blissfully, six of those on the silver screen, as God and Kubrick intended) I am still finding something new and tantalising and fresh to think about with this film with the deceptively slight plot.

After the shiver-up-the-spine chords of Richard Strauss’s Also Sprach Zarathustra have played over the opening credits we find ourselves back millions of years ago, at the very Dawn of Man.

Although still resembling a large species of monkey, the prehistoric tribe that we meet are undoubtedly humanoid and intelligent; and yet they are starving to death, scratching out a woeful existence whilst being literally surrounded by meat in plenty.

Then something strange is heard – sensed? — in the tropical night; and in the morning the tribe of humanoids finds that a pitch-black, obviously artificial monolith has intruded on their landscape.

What the monolith actually is, has been debated over and over.

Is it some sort of storage pack?

Is it actually one of the aliens, who we never see, at least to our knowledge?

And in the greatest flash forward in cinema history, we see the leading ape-man bash in the skull of one of the animals it has previously mingled reasonably peacefully with and, raising its bone weapon, launches it into the air where it becomes an orbiting space vehicle of the year 2001.

The Stars Our Destination

Something has been discovered on the surface of the Moon, now in the early stages of colonization.  And that something is four million years old, is obviously artificial – and is a monolith.  This time it is there to send out a signal that Man must follow.  You guessed it:  if Mankind – not very PC, but this was made in the sixties — is to fulfill it’s…you know the rest.  Destiny.  Space.  Stars.

So we enter the main section of the film, as we board the awesome spaceship Discovery, in the company of David Bowman (Keir Dullea), Frank Poole ( Gary Lockwood) and the computer HAL (voiced by Douglas Rain) , who are headed on an odyssey into deepest space – and beyond.

It’s impossible to convey to anyone who hasn’t seen it, just how many small touches go to make up the infinitely complex entirety that is 2001.  Small touches such as the reaction of civilized 21st century man, on discovering the monolith, being so similar to the reaction of his primitive ancestors.  Or of HAL being the most interesting and human being in the entire film, despite being basically a red fish lens and a voice.

You can pretty much pick your favourite moments.  Or most agonizing one, which for me must surely be the dismantling of HAL.  Hell, call it what it is:  the murder of a sentient being, of a conscious entity.

As HAL’s higher units are switched off he reverts to a baby song he was taught in the early stages of his programming.  And never have the simple words of ‘Daisy, Daisy, give me your answer, do’ sounded so heartbreakingly poignant.

Watching this scene a number of years ago, it occurred to me that Kubrick has quite often had his characters revert to the primitive or infantile.  I was thinking in particular of the closing scene of Full Metal Jacket, where the squad begin to sing the song of the Mickey Mouse Club; but it could also apply to Jack Torrance’s descent into growls and grunts as he chases Danny at the end of The Shining.  Or then there is Alex’s talk of ‘eggywegs’ and ‘naughtynaughtynaughty’ and so on throughout A Clockwork Orange.  And although it’s true that the language is invented by the novel’s author Anthony Burgess, it is used very gleefully by Kubrick.

In fact, 2001 uses dialogue very sparsely indeed.  There is none spoken at all for the first twenty minutes; and it is used with great deliberation thereafter.  I’ve no doubt that somewhere a particularly anal-retentive Kubrick-head has done an actual word-count.

The use of music more than makes up for that.  Also Sprach Zarathustra, with its appropriate connotations of the Overman, has become instantly recognizable.  And instead of space vehicles making noise in a vacuum we get The Blue Danube, seeming astonishingly appropriate for our planet seen from space.

Maybe it helped that I was still a young fella with a dirty mind (as opposed to an old fella with the same) that it first dawned on me that there is a possibly Freudian interpretation of 2001.  Not that I give much credence to dear old Freud, but it has to be said that once you see it you can’t not see it:  the spaceship Discovery does look awfully like a great big penis, thrusting its way into the void.  When you add to that the image of the vehicle’s Pods (used for external work) drifting into space like spermatozoa and the ultimate outcome being the Star Child staring out at us, it is rather tantalizing.

The film has also dated pretty well, apart from the rather obvious point that we still haven’t established a base on the Moon.  But we do see what are basically Tablets and Skype.  And we’re certainly getting there with Artificial Intelligence.

[Incredibly, I was only reading yesterday that scientists are experimenting with deliberately making a psychopathic android.  Just to see what it’s like, like.  I tell you, some of these guys have way too much time on their hands.  I mean, what could go wrong?]

It helps that there are no scenes set on 21st century Earth; but that incredibly uncomfortable looking furniture on the space station does look like a very sixties idea of what future chairs would look like; and it’s a wonder that a guy with the attention to detail of Kubrick hadn’t realised that styles might have changed in a decade or three.  You know, to have chairs that you could sit on without having a massive brain embolism.

Other details simply couldn’t be helped.  Who would have thought that PAN AM, whose logo is on the side of one of the space craft, would be long gone, due to circumstances that could hardly have been foreseen?

It didn’t seem that the film itself would survive much beyond its release.  Early signs weren’t good; and then, the story goes, the hippy-and-acid generation got into the hallucinatory effects as Bowman goes through the Star Gate in the last quarter-hour of the film.

In fact, there’s a rather wonderful story of photographer David Bailey and the Rolling Stones at a showing where you could hardly see the screen for hash smoke, and one of them gave the interesting interpretation:  “That’s wot Kubrick’s monolith was, wannnit?  A giant slab of ‘ash.”

Well, it’s as good an interpretation as my Space Penis and Pod Sperm Theory.

2001:  A Space Odyssey has been back in cinemas for the past week and I’m glad to say that it remains as baffling, enigmatic, beautiful, terrifying, awe-inspiring and moving as ever.  I was thrilled to see it…one last time?

I watched it at the PALAS cinema in Galway and if this does indeed turn out to be the last time I see it on a big screen then I could have asked for no better swan song.  It is showing with superb sound, the musical prelude and the intermission all intact.  Leaving aside Kubrick’s later Barry Lyndon, it is as perfect a film as I have EVER seen.