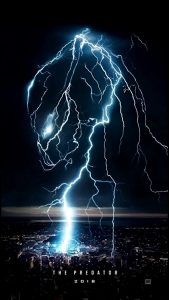 My dear old dad always told me not to mock the afflicted, so I’m not going to take up too much of your time in talking about fan-favourite Shane Black’s lazy and truly dreadful comedy-sequel to the great Schwarzenegger original.  I mean, even that title of theirs shows how little he and so-scripter Fred Dekker could be bothered their asses.

And the only reason that I’m printing anything at all is because, just when I had the God-awful Truth or Dare down as the very worst film of 2018, along come Shane and Fred to make a liar of me with their alien predators, their comic-book army tough guys, and their cardboard villain shady government-types.

Shane and Fred also throw in a couple of predator-dogs, just to prove that they learned nothing from that other best-forgotten sequel, Predators.  (The titles are really great, aren’t they?)

This one opens straight onto a Star Wars type space fight that unfortunately made me wincingly think of Mel Brooks and Spaceballs, or History of the World, Part 1.  I never really recovered from that.

Part of the spaceship nearly hits super-macho sniper Quinn McKenna (Boyd Holbrook) just as he is about to make a hit on the head of a Mexican drug cartel.  Barely fazed, due to his super-coolness, he looks at the wreckage hurtling towards him from space, cracks a joke that is really unfunny and makes the kill anyway.  And yeah, it’s one of those films that will have you saying things like ‘makes the kill’.

Quinn gets locked up with some army vet ‘crazies’ because he has seen things he shouldn’t have and they escape, naturally.  The crazies are, of course, standard fare, not really crazy at all, just some actors trying to do insanity really, really badly and milking it for laughs that aren’t there.   You know how it goes: a guy who is supposed to have Tourette Syndrome, leading him to say filthy things that are really unfunny and another guy who has some condition that makes him tell filthy jokes that are also really unfunny.

I laughed until I didn’t.  Actually, I’m crying tears of blood just remembering this.

Why prolong the agony?  There’s nothing good to say about this mess.  Nothing.  If you’re interested you’ll see a normal-sized predator, an eleven-foot one and some predator dogs.  Everybody fights each other and there are a few attempts at in-jokes (‘GET TO THE CHOPPA!’) that at this stage were predictably…all together now:  REALLY UNFUNNY.

And when you think that it can get no worse, there’s the film’s ending, which Shane apparently had left over from his Iron Man III.

The one really efficient thing about this one is that it has probably killed the franchise stone dead.  So maybe it had something going for it, at that.