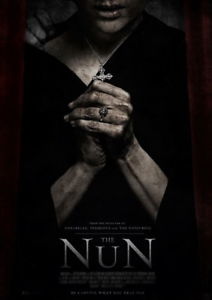 Although of course we didn’t call them that back in the day, a Cinematic Universe was what first got me interested in movies in the first place.  After all, that’s what all those Universal classics of the 30s and 40s were, what with the Frankenstein Monster, the Wolf Man and Count Dracula eventually meeting up with each other.

Mind you, the less said about Universal’s attempts to recreate that magic with their woeful recent version of The Mummy, the better.

So at the moment, as if were a New Thing, we’re all enthusing over the Marvel Universe and the MonsterVerse; some of us are even enjoying the DC-verse.  And with The Nun, we have the fifth feature film in The Conjuring Universe.  (There’s also a short called The Nurse, joining Annabelle and Annabelle:  Creation.)

And this one isn’t half bad at all.

Sure, the plot from screenwriter Gary Dauberman is as thin as Slenderman himself, but it more than makes up for that with the sheer beauty and wealth of Gothic imagery, something that I can never get enough of. The building that doubles as the abbey and convent is simply magnificent, filmed at Corvin Castle in Transylvania.  Director Corin Hardy adds in magnificent graveyards filled with crosses that keep the Evil in, not out; and there are fabulous, mouth-watering shots of people walking through mist-shrouded backdrops.

I simply love all of this and would see the film again just for that.

The performances aren’t too shabby either:  Demián Bicher as Father Burke has one of those great, handsome but lived-in faces that belong in French existential films; and Taissa Farmiga is nicely low-key but arresting as Sister Irene.  They’ve been called in by the Vatican to investigate what is going on at the  Cârta Monastery.  And they are aided by a French-Canadian, Maurice Theriault.  And here Jonas Bloquet takes a stock character and makes him believable and likeable.

Of course, it all turns out to be tied in with the demon Valak from The Conjuring 2, who takes the form of a nun.  Incidentally, this is a prequel to that film and as it is set in 1952 is chronologically the first in the series.  Valak is played by Bonnie Aarons, but as I said when reviewing The Conjuring 2 they should have just cast Marilyn Manson and saved a fortune on special effects.

Is it scary?  No, I couldn’t say it is; it’s another one that relies on jump-cuts; but the audience I saw it with weren’t complaining and seemed to have a good time.

And for me it was well worth the visit just for the incredibly atmospheric shots and that great big creepy castle.  God, I would love to visit that place!