Stephen King’s The Dark Half

Home » All Posts » Stephen King’s The Dark Half 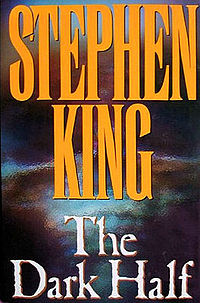 “Kull meditated a while, then spoke.  ‘Can you summon up demons?’

“’Aye.  I can summon up a demon more savage than any in ghostland – by smiting you on the face.’”

Fittingly for a novel that deals so obsessively with the subject of twins, doubling and mirror images, Stephen King’s 1989 novel The Dark Half is itself a companion piece to his earlier Misery.  However, while that novel is a straight psychological thriller, The Dark Half is a full-blown supernatural horror.

Both have as their central characters an author forced to write under the most extreme conditions and duress.  Here, Thad Beaumont is an English teacher and the moderately successful author of two books under his own name.  He is also the author of four wildly violent and enormously successful moneyspinners in the crime genre, written under the pseudonym of George Stark.

Similarities to King himself abound, as does the theme of twinning.  Even in an author’s note right at the beginning, King acknowledges his debt to ‘the late Richard Bachman for his help and inspiration’, Bachman of course being King’s own pseudonym before he was outed by a keen-eyed Washington book clerk.

Thad has been outed too, but by a much more malicious snake of a law student (there’s a surprise); and in order to frustrate ‘the creepazoid’ and avoid blackmail he has decided to very publicly bury his alter ego and return to ‘serious’ writing.

The only problem here is that George Stark doesn’t want to stay dead and he is on a very blood-drenched murder spree, wiping out anyone who crosses his path as he tries to hold onto life.

Now this is a pretty far-out concept, even for King:  this guy isn’t just a ghost, he’s the very material ghost of a man who never existed in the first place!  Have you got that?

Thad and his wife Liz have twins; she has previously miscarried twins; they have twin homes in King’s fictional Maine towns of Ludlow and Castle Rock; the study in the latter has twin entrances; endless examples of twinning and duality abound throughout the novel.

And Thad himself was originally a twin:  when a suspected brain tumour was operated on when he was eleven, it was found that he had the remains of his brother in his head – an eye, part of a nostril, teeth and fingernails – and they had begun growing again.  In a fascinating and horrific way Thad had eaten/absorbed most of his sibling in the womb.

That’s about as close to an ‘explanation’ as we get; and we get none at all as to how Stark comes to be in possession of such items as explosives and his sinister black Toronado car.  He simply moves through the book like a gory and disintegrating supernatural force.  And it is a tribute to King’s power as a writer that he pretty much gets away with it.

Yet The Dark Half isn’t one of his best works:  the characters don’t come alive (no pun intended) in the way that they normally do with this writer.  And although it introduces Sheriff Alan Pangborn of Castle Rock – successor to the late George Bannerman of The Dead Zone and Cujo and a major new character in the King universe – he spends most of the novel trying to catch up with what is happening.  In fact, the most vivid character is George Stark himself – ironically, a man who shouldn’t even exist.

In fact, who simply can’t even exist.

When George isn’t taking centre place on his gruesome stage (and when he does the book rips along like his Toronado) there is a lot of pausing for talk and exposition.  Incredibly for a King novel, it occasionally even drags.  And at under 450 pages this isn’t even one of his longer ones.

There are also odd diversions, which in fairness add a texture to the whole, such as a brief but over-detailed glimpse at Alan’s home life with his wife Annie.

Strangest of all is a backstory given to Liz, in which she almost dies after being pushed – perhaps intentionally – down an escalator.  Surely this has to be a reference to the serial killer of King’s Dark Tower fantasy sequence?

As it is with George Stark himself, The Dark Half at times appears to lose cohesion.

Psychopomps and the Legacy of Lovecraft

The book is best when describing the arrival of the sparrows, which according to folklore act as psychopomps – and are the emissaries of the living dead.  Now the first time that I heard of this concept was well over forty years ago, when reading H.P. Lovecraft’s The Dunwich Horror and shuddering at the thought of the whippoorwills piping outside the window as they waited for the spirit to pass from a body, hoping to catch it.

I have no doubt that this is what inspired King here.  It’s a chilling concept that was painted and fleshed out beautifully by Lovecraft.  King’s estimation of the Pale Prince of Providence seems to vary according to which mood he’s in; but without a doubt, he has been heavily influenced by him, just as has every other horror writer of the 20th and 21st centuries.  On occasion King has paid superb homage to him, as with the short stories Jerusalem’s Lot and Crouch End; at other times he has embarrassed himself by taking on the Master at his own cosmic game, as with the disappointing novel Revival.

Be that as it may, King is excellent here at describing a mass of what seems to be millions of sparrows as they await the essence of the thing that is George Stark; and because of the Hitchcock film that these scenes call to mind, King does the wise thing and deliberately name-checks Daphne du Maurier’s strange short story The Birds.

And in one brilliant moment, when I expected the countless sparrows that line the road in front of Thad’s car, King – rather than have them simply move back to let him pass, as I had expected him to do – instead, has them form twin corridors for the wheels of his car to move through.  This, to me, is a peculiarly eerie moment, worthy of Lovecraft himself.  Ore even, perhaps, of Hitchcock.

The Dark Half is not one of Stephen King’s best novels, but like almost everything else from this period it is well worth a read.