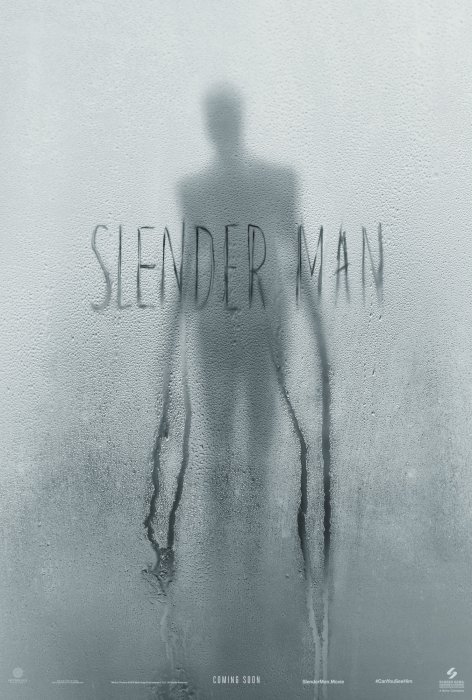 For you faithful few who read these ramblings of mine and who may have feared that my absence this past while meant that I eventually creaked towards the door marked EXIT, fear not.  I haven’t fallen off the twig quite yet; but I have had a pretty awful couple of months, between one thing and another.

As a result of that, two movies I was particularly looking forward to – Mary Shelley and Sicilian Ghost Story — have come and gone.  Now, despite my cinematic withdrawal symptoms, I wasn’t in the mood for anything heavy; and so it was off to see something that would be hopefully brain-dead, escapist entertainment.  Slender Man sounded as if it just might fit the bill.

A couple of the guys who work in my favourite cinema – the IMC in Oranmore, since you didn’t ask – hadn’t seen the film when I was collecting my ticket, but were alarmingly enthusiastic about the Slender Man games and Slender Man creepypasta.  I didn’t have the heart to tell them that I had no idea what the hell creepypasta actually is — unless it entails eating Italian food in a haunted house.

The modern-day urban legend that director Sylvain White and writer David Birke draw from is really quite fascinating.  It’s only a decade old and was the warped dream-child of a certain Victor Surge.  As far as I can tell it began with eerie, faked images of a thin man in a suit standing near children who would later vanish.  He is sometimes shown with tentacles appearing to sprout from his back; and the images in fact were the cause of one real-life attempted murder of a child…by another child.

Perhaps due to the dubious taste in making a film based on such a character, Sony – who are behind this – seem to have had second thoughts, meaning that whole scenes have gone missing.  Which may explain the fact that the film makes little sense at times.  Certainly many of the images from the two trailers seem to be as missing as the teenagers soon will be.  It’s all rather frustrating, which is a shame, as the film isn’t nearly as bad as you might think – although it’s certainly not The Ring, which it borrows very heavily from.

And some of the reality-warping effects are rather good, especially one mind-altering scene in a library.

There’s also a nice attempt to link this modern myth with more ancient ones, including – intriguingly, I thought – one to the Pied Piper of Hamelin, a tale that has always seemed to touch on primal childhood fears.  Unfortunately, this doesn’t go anywhere.  If there’s an attempt at a franchise here perhaps the sequel can be more of a full-blooded one.  Oh and for heaven’s sake, light the next one a bit better; it’s hard at times to see what is in the background with this one.

Maybe I’m giving Slender Man more credit than it deserves because I’m still wincing from thoughts of Truth or Dare, the very worst film of its kind in years.

Yep; I’m still not over that one.

Slender Man, however, despite the hatred being thrown at it and despite its many flaws, is worth a look.