One of the Best Films of the Year: 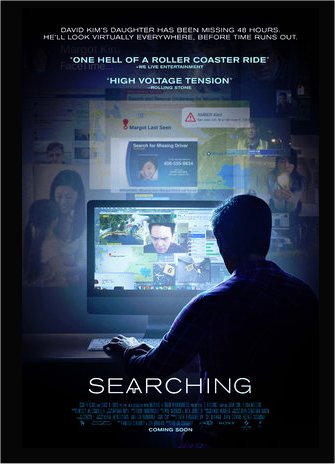 One of the many extraordinary things – and there are so many – about director Aneesh Chaganty’s unexpectedly superb Searching is that only a few decades ago this film would have been classed as hardcore science-fiction.  And possibly not even particularly believable SF at that.

Yet with everything here shown through the use of the internet, laptops, smartphones and even CCTV security footage, it really hammers home — to my generation, at least — how utterly commonplace all of this marvelous and frightening technology has become.

Frightening?  Damned right it’s frightening.  If you’ve never given a thought to the massive amount of digital footprints that we’re leaving behind us every single day, then this film will have you approaching your laptop with a pair of tongs and a hell of a lot of caution in the future.

The opening ‘scenes’ give us a wonderfully concise shorthand account of the happy marriage of David and Pamela Nam Kim (John Cho and Sara Sohn) as they watch their daughter Margot (Michelle La) grow up.  It also takes us through Pamela Nam’s early stages of and eventual death to, cancer.  Using nothing but video memories it is a masterclass in filmmaking and indicates to us that we’re in for something special.

After Pamela Nam’s death the father and daughter appear to have a loving and trusting relationship, keeping in touch constantly by way of phone calls, emails and screen time.  But when Margot goes missing David is forced to go into her laptop and what he finds out about his daughter there is so strange and unexpected that he reluctantly comes to the conclusion that he has never really known her at all.

This could have all amounted to a cold and calculated exercise in style over substance; but by God it is anything but.  And that’s down in part to the excellent screenplay by Chaganty and Sev Ohanian.  We really care about these people, despite the fact that we’re never really seeing them ‘off-screen’.  This leads to all sorts of weird feelings.  After all, if David is becoming a reluctant voyeur of his daughter’s secret life, then what does that make us, the audience?

Perhaps everyone will see this in a different way, but I began to feel uncomfortably like a peeping-Tom myself, sitting there in the dark, intent on and absorbing what David was going through.

In many ways, Searching reflects our own point of view right back at us.  It’s disconcerting.

Assisted by Detective Rosemary Vick (Debra Messing) David frantically contacts his daughter’s friends, only to discover that…well, she really doesn’t have any.  Not outside of the appalling world of Facebook and cyber La-La land at any rate.

Anyone who reads this site regularly will know what I think of all that garbage; but I wonder how many younger people watched this film with growing unease.  Hopefully it might get them to cop on and get out there to find a life for themselves.  You know, that old-fashioned concept:  a real life, with real flesh-and-blood friends instead of five hundred plastic ones and a thousand moronic ‘likes’.

I mean, get this:

David calls up the head of a study group that Margot seemingly belongs to, only to discover that this irritating waste of space couldn’t really care less about his daughter.  Yet when her disappearance becomes big network news (with all the accompanying phoniness that entails) there she is emoting like mad, fake tears pouring down her witless cheeks and bubbling about how Margot was, like, her REALLY BEST FRIEND.  You can avoid reality TV rubbish as much as you like, but she’s the kind of 15-minutes-of-fame, huge-in-her-own-head, shallow bimbo that we’ve all become horrendously familiar with.

Then there are the anonymous keyboard creeps who open up their little pots of cyber-vitriol every time they see a human tragedy; predictably, this lot starts spouting their hatred towards David, calling him the usual things that these vile characters always do.

And again, it is frightening because it is very, very real.

It truly is quite remarkable, the manner in which the film’s makers have taken the route they went – what should have been a distancing method — and still made us suffer with David.  And that is surely down to John Cho’s astonishing performance.  This is a film that depends so much on the actor’s face, and Cho’s shows a range of emotions that fluctuate between bewilderment, anxiety, anger, pain…you name it.  The fact is that with a lesser actor Searching would never have worked.

But work it does.  It is clever, involving, deep, moving and one of my favourite films of this year.