Nemo: The Roses of Berlin

Home » All Posts » Nemo: The Roses of Berlin

The Roses of Berlin 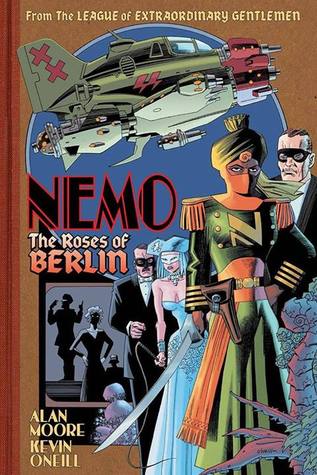 As with Heart of Ice, the first of writer Alan Moore and artist Kevin O’Neill’s Janni Dakkar/Nemo outings, the slim (52 pages) volume at hand is enjoyable enough, even though it feels lightweight next to its big brothers in the League of Extraordinary Gentlemen universe.

Nemo: The Roses of Berlin moves forward thirty-five years to find Captain Janni nearing fifty, still plowing murderously away at the career she inherited from her fiercesome father:  pillage, slaughter and piracy on the high seas.  By this time, however, she has refined her looting to German vessels, seeing that it is now 1941 and Germany is at war with her son-in-law Robur’s home nation of France.

One of the most amusing of the many conceits of Moore’s world – which is inhabited by literary and cinematic characters thrown together in one delicious gumbo – is that here it was not Adolf Hitler who rose to power but Adenoid Hynkel.  And Hynkel was the Hitler-based character played by Charlie Chaplin in The Great Dictator (1940) Dr. Mabuse sums him up by telling Janni:

“You must understand that alone, Herr Hynkel is a solitary maniac intent upon exterminating Jews and brunettes.”

Ah yes, those troublesome brunettes, I know them well.  And don’t even get Adenoid or me started on troublesome Jewish brunettes or there’ll be no stopping us! However, Herr Hynkel no longer is alone and has formed an alliance with Queen Ayesha, who remembers Nemo as if it were yesterday (and events always happened only yesterday when you’re an Immortal); and Ayesha wants Janni dead.

Fritz Lang’s 1927 silent film classic Metropolis is the inspiration for Hynkel’s Berlin — complete with female automaton — created by the sinister Carl Rotwang; or rather it is ‘a conurbation manifesting the cheese-dreams of infamous stranger-to-sanity, the happily defunct Carl Rotwang.’  And it was ever thus:  the works of good men lie in the dust whilst those of madmen live on.

Irritatingly, Moore allows himself one of his favourite bits of business:  long sequences where the dialogue is in a foreign language with no translation.  This is fine when we can see from the images what is taking place.  Here, though, it smacks more than a little of self-indulgence.  Well, unless you’re fluent in German, which I’m not.  And then it’s still self-indulgent, but what the hell.

As I said when reviewing Heart of Ice, these are essentially overgrown comic books, albeit very good ones.  Very good ones.  But those that that make up the main volumes of The League of Extraordinary Gentlemen are something altogether special.  They are truly substantial collections that are full of extras, along with Moore & O’Neill’s added bells-and-whistles, all of which make them worth collecting and deserving of every cent spent on them.

Once again with the Nemo spin-offs the best part is the four pages of text that make up a column called The Johnson Report.  These are very clever and quite hilariously written by Hildy Johnson who I’m guessing – only guessing, mind – is Moore’s version of the funny, barbed and heavy-drinking Dorothy Parker.  In this additional piece to the main story Hildy has come out of retirement to interview Princess Dakkar as she turns seventy.  And Hildy always gives herself the best lines.

She last encountered Princess Dakkar “more than two decades before when we each counted several hundred men amongst our conquests, although in entirely different fashions.  Most of hers wound up either dead or wishing that they were…but so did most of mine, now that I think about it from the vantage point of near sobriety.”

Nemo:  The Roses of Berlin

by Alan Moore and Kevin O’Neill