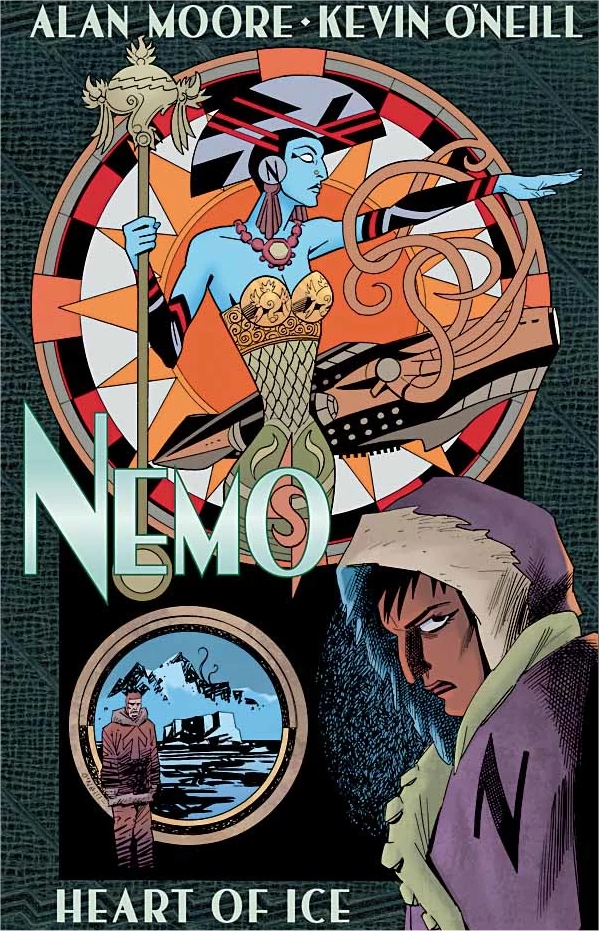 “Sailed from Lincoln [Island] with the morning tide, and a heavy heart.  I am discouraged by the fact that my young wife has lately given birth not to a son and heir, as I had been convinced the gods would surely grant me, but a daughter that she has named Janni, for her mother.  Though she often brings the child to me and tries to make me love her, I cannot, so great has been my disappointment.  Thus I take my men, the Nautilus, and leave mother and babe both wailing on the beach, bound for Antarctica, where I may find a cold that is a match for the bleak iciness within my bosom now. “

In The League of Extraordinary Gentlemen Volumes 1 & 2, the Black Dossier and finally in Century, Alan Moore and Kevin O’Neill explored their invented universe of mixed literary heroes.  He took the likes of Haggard’s Allan Quatermain, Stoker’s Mina Murray, H.G. Welles’s Invisible Man, Stevenson’s Dr. Jekyll and Mr. Hyde and even Ian Fleming’s James Bond and he let them loose against an equally compelling background.

It’s a trail that was blazed for him with the likes of Philip José Farmer’s Wold Newton concept and Kim Newman’s outstanding Anno Dracula series; but Moore, with his customary attention to detail really got stuck into the minutiae of this fictional world, especially in the 60 pages of closely written text that filled Volume 2’s Almanac and in Black Dossier, one of my favourite and most re-read books.

You can’t really call these comic-book collections; I think that you would damned near have to come up with a new word for what Alan Moore does, in the Dossier especially.  And of course, part of the fun is seeing how many references – often incredibly obscure – you get.  Luckily, Moore and I seem to have been enthralled by the same works in our mis-spent childhoods, so I usually take pride in just how many I catch.

Nemo:  Heart of Ice was the first part of a spin-off trilogy and it came as something of a shock to realise that it was just a bit flat and bland.  And right there are two words that you just don’t associate with this writer.  Still, Moore at his worst is better than most writers at their best.

It is odd that it doesn’t quite work.  After all, he has set it in 1925, with Captain Nemo’s daughter Janni taking the Nautilus to the Antarctic and right into the very territory covered in the great H. P. Lovecraft’s novel At the Mountains of Madness.  Why it never really comes alive is a puzzle.  Even O’Neill’s normally excellent artwork feels a bit tired.  We should have been feeling the awe of this vast setting of ice, snow and bugger-all else and yet it just never comes across.

At the very least our first sighting of a shoggoth should have damned near overwhelmed us.  Christ, it’s meant to.  In my worst hangovers I’ve never seen anything like I imagine Lovecraft’s shoggoths to look like.   And I’ve got a very decent imagination, not to mention, back in the bad old days, a fairly good history of hallucinatory hangovers to draw on.

But what we get in this splash page isn’t something that would send even a rather timid soul like myself into a cataleptic fit but instead what looks like that old load of Martian weed that was clogging up the Thames back in Volume 2.  Trust me, Mr. Hyde would have taken one sneering look at this yoke and got stuck in there, tearing it apart with his teeth whilst singing ‘You Should See Me Dance The Polka’ and walking off into the sunset, merrily twirling his cane.

Still, there’s the framing story with the newspaper tycoon Charles Foster Kane and his connection with Ayesha, the She of Haggard immortality.  And in one single panel O’Neill comes alive and gives us the body language of Citizen Kane’s sidekick Jedediah in that marvelous film.  I could nearly picture Joseph Cotton delivering those lines.

So yeah, it’s a bit flat, a bit bland; but that’s only in comparison to what else has gone before.  And at the end of the day this one really is just a big comic book; no new names need be created here.

For me, the best part was the four-page text piece at the end, set in 1938. It’s written in the guise of one of those female socialite gossip columnists of the period and is pure delight, letting us see Moore’s wonderful sense of humour in full flight.

“Despite her being seemingly the latest in a line of ocean-hardened privateers, I can with some considerable smugness make report that I was able to drink Mistress Kidd beneath the table.  Fortunately, shortly after that she proved entirely capable of eating me beneath the table so that we were even, and with more than honour satisfied.”