‘…the Economics of Famine in the West of Ireland’: 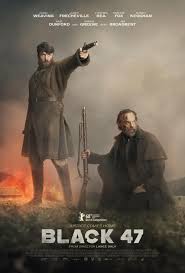 I’ll be seeing that one in an Arts House cinema.

Or so I thought, some months back, when I first heard of Black 47, which was being described as the first film ever made about the Irish Famine.

Well, I got that one wrong, didn’t I?

Instead, it has opened very big indeed; but I wonder if the quieter approach mightn’t have worked better, because I’ve a feeling – and I sincerely hope that I’m wrong again – that this is going to leave a lot of viewers either disappointed or, worse, indifferent.

To get one thing out of the way: this business about the film being about the Great Famine is a wee bit disingenuous, to put it politely.  What it is, rather, is a very pronounced West of Ireland Revenge Western, with the Famine as a backdrop.  This is very much a genre film.

It even has all the staple ingredients of the American Western movie, including two male protagonists and old friends who find themselves on different sides of the Law – and, you know, growing older in a changing land.  All that good stuff.

Deserting from the British Army in Afghanistan, Connaught Ranger Martin Feeney (James Frecheville) – a guy who takes the phrase ‘strong silent type’ to the nth degree – returns to his home in Ireland during the worst year of the Famine, 1847.

He’s none too pleased with what he sees, and no wonder.  He has come back to a heartbreaking landscape (photographed in washed-out, desaturated tones by Declan Quinn) where the poor are being evicted from their homes and left to either freeze to death or starve to death; and all this whilst swinish collaborators line their own pockets. So… some things don’t change that much then.

I don’t know what they were teaching mercenaries in the 1840s in Afghanistan, but whatever it was Feeney comes back as a kind of dead-eyed Chuck Norris Army of One.

Once he’s wiped out an entire police force, he really gets down to business, with the view of going right to the top with the brutal landlord Lord Kilmichael (played by the great Jim Broadbent); but he is being hunted in turn by his erstwhile comrade Hannah.  And as portrayed by Hugo Weaving, Hannah looks every inch the part.

Let’s face it: the components of the American Western are all over Black 47.  I was reminded of Peckinpah’s Pat Garrett and Billy the Kid, where a man is being chased by a friend who really doesn’t want to catch him anyway.

And as Hannah and an obnoxious British officer called Pope (Freddie Fox) set out on his trail I was reminded even more forcibly of Eastwood’s The Outlaw Josie Wales as they are joined by others along the way, in a sort of rag-taggle fashion.

One of these is the Irish Private Hobson (Barry Keoghan) and the other is a translator, the dry-witted Conneely.  And of course, as portrayed by Stephen Rea, he manages to steal every scene he’s involved in.

The Western genre aspect is even made more specific with Lord Kilmichael’s comment that there are some who would be happy if Irishmen were made as rare in Ireland as Red Indians are in Manhattan.  Of course, the good Lord isn’t one of them.  He just thinks that ugly Irish people mess up the beauty of the landscape a bit, inconsiderate uneducated Irish bastards that they are.

Now all of this should have had my Celtic blood boiling.

The problem for me is that I never really became emotionally invested in the film, much as I wanted to be.  There was never a moment when I felt that surge to the head that such a film should produce.

Take the scene where Catholics are asked to ‘take the soup’, convert to Protestantism and be awfully jolly bloody glad that the Brits are there to help them out of their misery.  After all, the potato was something made for the slave, not for the hardy and the brave, as our Mr. Pope so sneeringly puts it, with typical British arrogance.

That should have been a heart stopper of a scene; and yet it seems to go nowhere.  It just lies there dead in the water.

Pope, however, is one of the more interesting and nuanced characters.  At first appearing to be one of those ignorant imperialist clowns that we’ve all grown to loath, he seems to have a heart buried in there somewhere.  Despite the fact that he dismisses a travelling journalist’s attempts to focus on the — quite cold and ghastly, this – ‘economics of famine in the West of Ireland’, it seemed to me that he was as horrified as the rest of us to discover that Lord Kilmichael’s Big House wasn’t suffering from famine at all.

Not in the slightest.

Instead, food and grain were actually being exported back to England whilst those ugly Irish peasants were starving outside his gates.

As Kilmichael explains with the utmost of logic, why should he be expected to pay an unreasonable tax by having poor people clogging up his estate? Far more efficient to throw them out. No hard feelings and all that, sorry if they die, but not really my problem, dear fellow.

Today we would call it genocide.

I’m actually far angrier writing this than I was when watching the film itself.  I can see the problem that director Lance Daley and his scriptwriters P. J. Dillon, Pierce Ryan, Eugene O’Brien and Daly himself had.  It’s a low-budget film about an extremely difficult subject and I’m sorry I’m not more enthusiastic about it.  I truly am.  It is the kind of project that I would love to applaud far more than I’m doing.

There was just never the kind of moment that a film like this needs.  One of those marvelously cathartic sequences as in Braveheart or Gallipoli or The Patriot where you just punch the air and go YES!!!

And looking at those three titles that I just pulled up, well…it kind of makes me wonder what Mel Gibson would have done with such rich material.

And maybe I’m not.

This is a huge subject and could have made a truly epic film.  It just isn’t this one, I’m so very sorry to say.