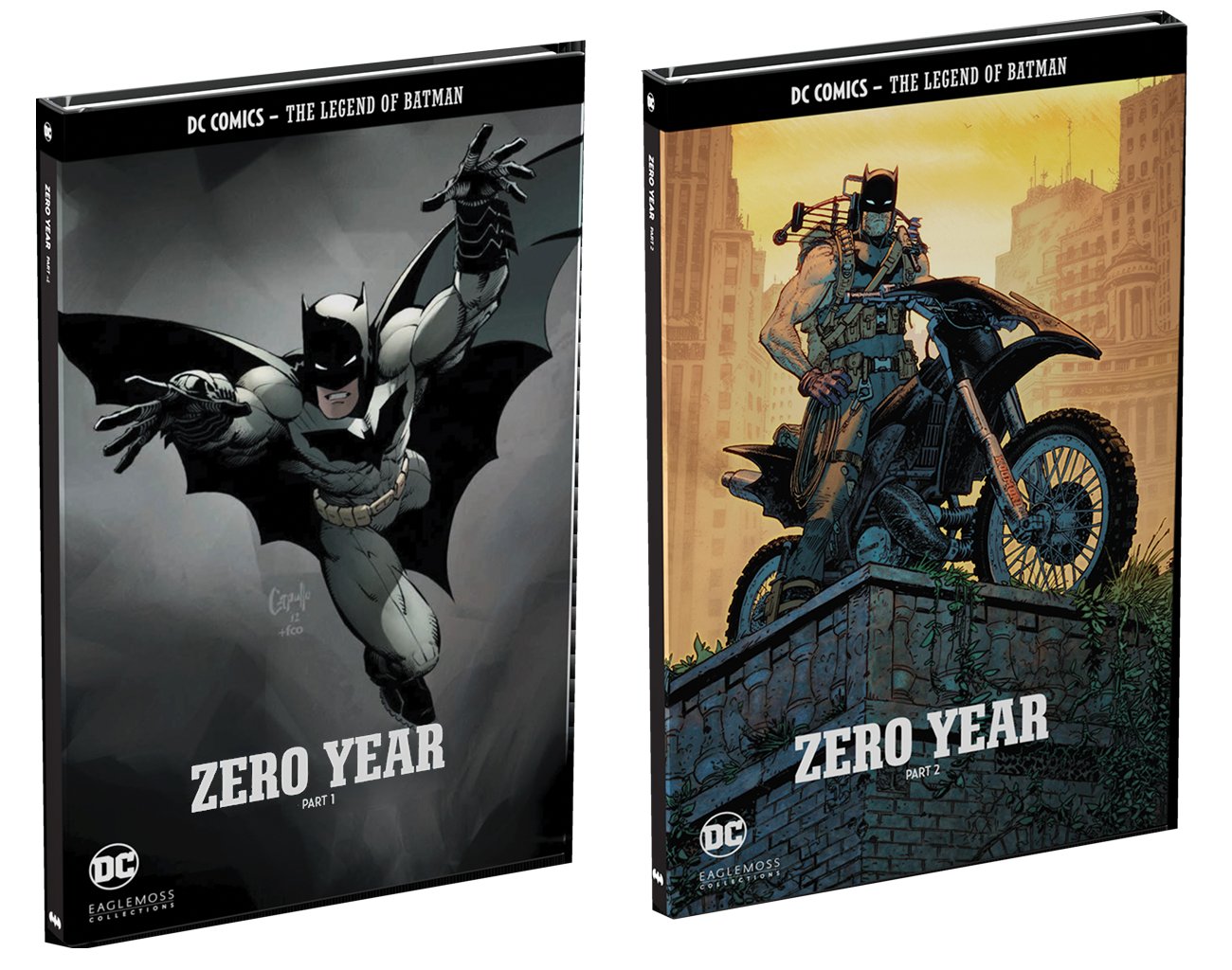 Legend of Batman is another set of collections from Eaglemoss, the quality of which I raved about last year when the company launched its series of Star Trek graphic novels.  And this looks to be every single bit as good, if the initial two volumes here are anything to go by.  Mind you, it is probably necessary to be a complete bat- fanatic if the intention is to collect all of the dozens of volumes.  I’m not quite that bad, but on the strength of Zero Year I will be dropping in from time to time to see if they have any of my favourites from over the decades.  These hardbacks look like a very good way to keep permanent editions of those favourites.

Here are collected the 12 issues from 2013/14 that attempted to retell the Batman’s origin and to fit it into The New 52 chronology, which pretty much rebooted all of DC’s titles.

It is an absolute cracker of a tale, written by Scott Snyder and very lovingly rendered by penciller Greg Capullo and inker Danny Miki, with a really gorgeous palette of colours from Fco Plascensia that gives us a vividly imagined Gotham City that is unlike the sombre, dark place that we’re used to seeing (although it is that, too).

The Return of Bruce Wayne

After years of roaming the world and extreme survivalist training, Bruce Wayne has returned to Gotham and is tentatively working out how to begin his war on crime.  It’s a complex set-up that gives us a Joker origin by way of Red Hood, but without actually showing the Clown Prince.  In fact, the main villain is a very psychotic Edward Nygma a.k.a The Riddler, which makes a nice change, the rare comics I’ve read lately being overstuffed with Joker tales.  There is also a secondary villain in the shape of the terrifying Karl Helfern; and if Zero Year would make a terrific film – which it would – this guy would move it very definitely into horror-movie territory.

There are some wonderful references to little bits of Batman’s career as we remember it, with giant pennies, odd bat-vehicles and the bat cave looming large – especially in one brilliantly iconic and hallucinatory sequence.  Even the death of his parents is well done, given that this is a problematic scene, since we have been shown it so many times.

And I love what the artists have done with butler Alfred Pennyworth, who gives Wayne a very practical buzz-cut.  He is very reminiscent of suave actor and war hero David Niven, and they have wisely kept the idea of Alfred having had military and medical training.

Wayne is a truly haunted and driven man; but here at the very start of his career we see how much he needs the help of others – in particular of James Gordon and Lucius Fox.  It does take a bit from the image of the lone vigilante, however; and it is interesting how the removal of the bat cape takes from a lot of the dark mystique of the character.  Indeed, as the story enters post-apocalyptic territory with the Riddler in charge of a jungle-like Gotham, courtesy of Poison Ivy, he resembles more of a Mad Max character, especially the Max of Beyond Thunderdome.

No matter.  As a piece of epic storytelling, with some great writing and superb action, it works for me.  I especially liked Wayne’s reaction to the Red Hood’s nihilism:

“You don’t stand for any truth at the heart of anything.  You pretend you do, talking about the randomness of life, the meaninglessness.  But  it’s all a sham.

“My parents’ death may have been meaningless, but their lives were anything but.  And yes, it all might end at any moment for any of us, in violence or not, but what matters is what we do before that.  The lives we lead.  And yours is an abomination.  You’re just an evil man, pretending to have a cause.”

One real problem here is that Frank Miller and David Mazzucchelli’s superb Batman:  Year One (which Snyder’s title obviously references) is now so firmly etched in many a reader’s mind, including my own, as the origin story.  With its beautiful economy it in  comparison makes the courageously ambitious Zero Year look more than a little on the bloated side.  And Snyder is obviously a fan, since he makes visual reference both to it and to Miller’s Dark Knight Returns – in particular with one splash page that recalls Superman regaining vitality from the sun in that latter work.

Another major problem is that with the idea of the city needing to be saved – and with the population witnessing this – by the Batman – I don’t see any way that this character would have grown to be the outsider-vigilante that we know he does.  Hell, the man would have been made Police Commissioner in perpetuity!

This is nit-picking, though.  It is a great big sprawling and rousing tale.  I’ll definitely be seeing how Volume 3 of Legend of Batman turns out.